A Matter of Faith- What Will It Take to Stop the Madness?

By Carol Round
CLAREMORE, OK (ANS) — “Direct your children onto the right path, and when they are older, they will not leave it” Proverbs 22:6

Did you know the recent school shooting at Reynolds High School in Troutdale, Oregon marked the 74th one since the Sandy Hook Elementary School shooting in Newtown, Connecticut in December 2012? In 2014, so far, there have been 37 school shootings and as of February, about half of the incidents were fatal. 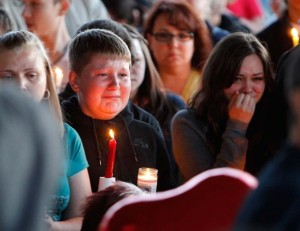 Supporters grieve at a candlelight vigil after the shooting at Reynolds High School in Troutdale, Ore.

In the latest shooting, at least one student was killed and a teacher was injured by a lone gunman who later took his own life. At this time, details are sketchy but according to police the teenage gunman used a rifle.

Have school shootings become the norm in our country? According to press reports, each gunman, including the ones involved in the Columbine High School massacre, occurring on April 20, 1999 in Colorado were outsiders-loners who didn’t fit in or who had been influenced by our culture of movie and video violence.

In the case of the Columbine massacre, 12 students and one teacher were murdered by two senior students, Eric Harris and Dylan Klebold. Although Harris and Klebold’s motives still remain unclear, their personal journals reveal they wanted their actions to rival the Oklahoma City bombing. USA Today referred to the Columbine massacre as a “suicidal attack [which was] planned as a grand-if badly implemented-terrorist bombing.” The two had also been influenced by violent movie and video games, according to the press.

School shootings have sparked debate over gun control laws, the availability of firearms in our country and gun violence involving youths. Discussion has also revolved around the nature of high school cliques and bullying as well as mental illness.

Why has no one stopped to consider that ultimate responsibility not only lies with the parents of the shooters but our society as well? Government cannot fix our broken country. We can’t enact enough laws to stop the madness. 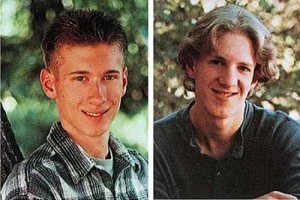 What can we do? As Christians , we have a responsibility-several actually-to not only make sure our own actions reflect our morals but to help others who are struggling. Can one person make a difference? You bet!

Reflect on these choices: