It happened again this week, another university professor was exposed as an unhinged liberal, filled with uncontrollable rage.

In the aftermath of the death of former First Lady Barbara Bush, tributes flowed in from around the world, except not from Randa Jarrar, a Fresno State University English professor. Jarrar tweeted that Mrs. Bush was a “racist” and that she was glad the “the witch is dead.” In response to the outpouring of support for the Bush family, Jarrar tweeted, “F… outta here with your nice words.” She also expressed extreme hatred for the relatives of Barbara Bush, tweeting “Can’t wait for the rest of her family to fall to their demise.”

While it is sad that a so-called English professor had to resort to profanity to express her point of view, it is even worse that someone entrusted to educate young people harbors such hatred. In response to the controversy, Fresno State University President Joseph Castro said, “Professor Jarrar’s expressed personal views and commentary are obviously contrary to the core values of our University, which include respect and empathy for individuals with divergent points of view, and a sincere commitment to mutual understanding and progress.” It was announced that an “investigation” into Jarrar’s behavior was underway.

This semester, Jarrar is on sabbatical and is traveling overseas. She crowed that because she was tenured she could not be fired. Her arrogance only enraged people even more and after her real phone number was posted, calls started flooding in to her office. To distract her critics, Jarrar falsely claimed that her work phone number had not been officially activated and posted another one for those who “really wanna reach me.”

Unfortunately, the phone number she posted was for a University of Arizona mental health crisis line. The volunteers operating the phones were inundated with calls from people wanting to complain about Jarrar, not those in need of mental health counseling. Jarrar’s stunt may have prevented those who were suffering from an actual mental health crisis from receiving critical assistance.

The sad episode not only exposes the sickness of Jarrar, but also the clear problems on many college campuses today. Throughout the country, in far too many colleges and universities, administrators have hired nutcases like Jarrar to teach impressionable youngsters. As a result, many parents are paying exorbitant tuition for their children to be indoctrinated, not educated.

Presenting alternative perspectives to liberalism is not allowed on many campuses. Just this week, Professor Josh Blackman tried to present a lecture, ironically on the importance of free speech, but was shouted down by protestors at the City University of New York School of Law. 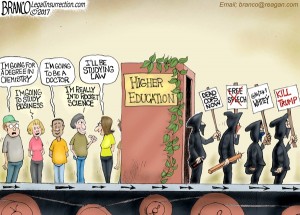 On a regular basis, conservative commentators like Ben Shapiro, Ann Coulter and Milo Yiannopoulos face threats of violence on college campus and outright hostility from administrators who look for every opportunity to cancel their speeches. Often, university officials delight in canceling conservative speeches by claiming that security costs are too high or adequate facilities for the speakers are not available.

In contrast, leftist viewpoints are seemingly always welcome and liberal professors are celebrated and protected no matter how extreme their views. Last year, Lars Maischak, another hateful Fresno State University professor, made news when he tweeted that President Donald Trump “must hang.” The history instructor was not allowed to teach during last Fall’s semester but, incredibly, was not fired.

In the case of Jarrar, Fresno State University should immediately terminate the employment of this hateful individual. She does not possess basic decency or respect for other points of view. Jarrar represents the antithesis to the type of atmosphere that should be cultivated on college campuses where differing opinions are encouraged and welcomed.

Another reason that may cause Fresno State to act involves the negative response from some of their major contributors. A few large donors are raising objections to Jarrar and threatening to withhold their usual financial support. One such contributor, Ed Dunkel, Jr., said, “I have huge concerns. This represents such an embarrassment to the university and the community. It’s hard to believe this is an isolated thing that just happened. I have to imagine people previously knew of this person’s character and what she’s about.”

In fact, donors may be the key in forcing universities to end the stifling environment of liberal indoctrination. If major donors started boycotting, university administrators would get the message quickly and may start to adjust their policies. Otherwise, the abuse of conservatives, the indoctrination of students and the vile hatred spewing from professors will continue unabated.