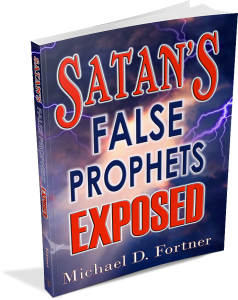 Fortner says, “The cross of Christ is no longer dripping with the blood of our Savior, but is covered with gold dust, and dripping money. There is oil seeping from a prosperity preacher who bottles it and sells it. There are false spirits that cause barking like a dog, levitation, weird laughter, and out of body experiences. Such is the state of many Charismatic churches today.”

Fortner said many of those churches have a mixture of the Holy Spirit and evil spirits. He quotes a former Christian who became a witch who went to a well-known church. She was prophesied over by four different people and they all said similar things, which amounted to God saying he is pleased with what she is doing and he will bless her work (in the coven), and to keep doing it!

He says this proves the pastor and those in his church are operating by divination and evil spirits, not the Holy Spirit.

He also has testimonies of people who have received demon spirits after being prayed for in one of the above-mentioned churches, especially those connected to Todd Bentley and others in the Prophetic Movement, or just listened to their CDs.

What is most shocking is the evidence he presents that shows some WOF preachers on TV are knowingly following Satan, because they acknowledge Satan during their preaching and teaching. He gives the evidence in print, but it is more powerful to see it on video, which he provides free online. You can see a big name WOF preacher saying, “I’m with Satan,” and another one, after taking an offering, says, “Tie my money, Satan.”

Unlike other books that have been written on this subject, Fortner grew up in an old-fashioned Pentecostal church where he was warned about the doctrines of the WOF Charismatics. The other books accurately show how wrong these movements are, but those books are being ignored because they were written by people who attack all Pentecostals and Charismatics, not just these movements.