A weakening Boko Haram reaches out to ISIS

Government spokesman Issa Tchiroma said the forces attacked Cameroon’s northern Madawaya forest and freed 28 children and at least 18 women. Boko Haram fighters had set up camp in the forest after another military raid drove them out of Nigeria. The terrorists had been training women and girls as suicide bombers, Tchiroma said.

Despite the regional efforts to contain Boko Haram’s insurgency, Western officials worry the presence of ISIS in Libya could help strengthen its collaboration with Boko Haram and trigger wider attacks. On Friday, U.S. Deputy Secretary of State Antony Blinken revealed there were reports of some Boko Haram fighters going to Libya to fight for ISIS. 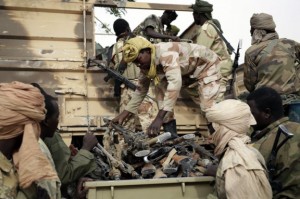 “The intent is clearly there, [but] the evidence of hard collaboration is still pretty sketchy,” British Foreign Minister Philip Hammond said Saturday at the Second Regional Security Summit in Nigeria. “If we see Daesh [ISIS] establish a stronger presence in Libya, that is more likely to step up the practical collaboration between the two groups.”

Last year, Boko Haram pledged loyalty to ISIS and even renamed itself the Islamic State West African Province to show its allegiance. But there is no proof of any cooperation between the two terror groups, said Ella Abatan, a researcher with the Institute for Security Studies in Dakar, Senegal.

Boko Haram’s insurgency has spread beyond the Nigerian border and has displaced more than 2 million people. The multinational forces have driven the terror group from many of its captured territories. But the group continues with sporadic attacks.

“What remains is to dislodge the terrorists from their hideout in the (northeastern) Sambisa Forest and safely liberate the Chibok girls and other victims of abductions,” Nigeria’s President Muhammadu Buhari said at the summit.