(WNS)–Abortion rates in the United States have dropped to the lowest level since the U.S. Supreme Court legalized the procedure in 1973, according to a new report from the pro-abortion Guttmacher Institute.

The biggest drops in abortion rates occurred in the West and South (both fell by 16 percent), followed by the Northeast (11 percent), and the Midwest (9 percent), according to the report.

The Guttmacher Institute’s data expands on last year’s report by the Centers for Disease Control and Prevention (CDC) on abortion rates from 2004 to 2013. According to the government data, abortions dropped 20 percent in that time period, to the lowest rate since Roe v. Wade.

Jones and Jerman cite data they collected themselves, as well as numbers from the CDC, and estimated the rest based on previous data and “key informants.”

The authors speculate that contraception availability and recently adopted abortion restrictions may have contributed to the downward trend that stretches back to the early 1980s. 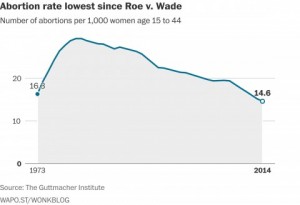 They point most recently to the 2013 Texas law that required abortionists to have hospital admitting privileges and abortion centers to comply with ambulatory surgical center standards. Though the Supreme Court struck down that law in 2016, about half of Texas’ abortion facilities had already closed and the state’s abortion rate had fallen by 13 percent.

But the authors admit abortion center closures are not directly correlated with decreases in abortion numbers. In Michigan, the report claims the number of abortion centers dropped by 33 percent while the abortion rate actually grew.

Pro-life leaders attribute the overall decline in abortions to an increase in pro-life legislation and changing hearts.

“One element that may not be getting its due is the increasing sense among Americans that abortion is no real solution for mothers, for their babies, or for society in general,” National Right to Life’s Randall O’Bannon told me. “When they see the child moving in the womb on an ultrasound, when they hear the heartbeat of the unborn child, when they know there are people and programs available to help them with a new baby and new circumstances, when they see what dismemberment abortion does to these precious children, the pain and agony that is involved in every chemical abortion, they look for life-preserving solutions that are better for everyone involved.”

Clarke Forsythe, acting president of Americans United for Life, told me the use of ultrasound imaging has been key to the success of “life-affirming laws” passed in the last six years.

“Such pictures are worth more than a thousand words when it comes to helping people understand whose lives are on the line,” Forsythe said. “But all of this does not change the fact that we need a more complete picture of the impact of abortion on women, through verifiable tracking. Abortion isn’t about women’s health, it’s all about population control.”

While surgical abortion numbers continue to fall, medically-induced abortions have continued to rise. In 2014, medication abortions accounted for 45 percent of abortions done at nine weeks gestation or earlier, up from 36 percent in 2011, according to the Guttmacher report.