Abortionist Who Killed Woman in Abortion Gets National Award and Promotion

Lakisha Wilson was the beautiful 22-year old mother of a young son when she was tragically killed during a botched second trimester abortion done by Lisa Perriera at Preterm abortion clinic in Cleveland, Ohio, last year. 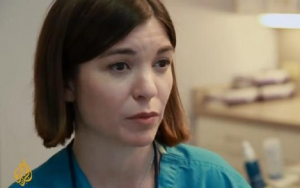 Now, the Physicians for Reproductive Choice have announced that Perriera will receive the George Tiller, MD, Abortion Provider Award for 2015, which “recognizes a physician early in their career who provides abortions while demonstrating leadership and courage, even in the face of adversity.” She is set to be honored at an awards ceremony to be held on New York City on June 1.

That “adversity” included repeated calls for disciplinary action and even criminal charges related to Wilson’s avoidable death by local and national pro-life groups, including Operation Rescue.

“Clearly, the Physicians for Reproductive Choice are engaged in a public relations campaign to make Perriera appear to be the victim when the truth is that she is the victimizer. The true victims are her dead patient, a dead viable baby that Ohio laws should have protected, Wilson’s motherless son, and her grieving family,” said Troy Newman, President of Operation Rescue.

Astonishingly, in addition to receiving the Tiller Award from the Physicians for Reproductive Health, Perriera has been promoted within the last month to a position as the Ryan Residency Training Program Director at Thomas Jefferson University School of Medicine, in Philadelphia, Pennsylvania.

“Somehow, it seems almost appropriate for Perriera to flee her embattled position in Cleveland for refuge in the hometown of Kermit Gosnell. They actually have a lot in common having both killed patients during abortions,” said Newman.

Unfortunately, while Gosnell was convicted of manslaughter in the death of his patient, Karnamaya Mongar, Perriera has gotten off scot free.

There is ample evidence to show that Perriera knowingly conducted Wilson’s late-term Dilation and Evacuation dismemberment abortion under dangerous conditions, then made nominal efforts to revive Wilson once things went wrong. 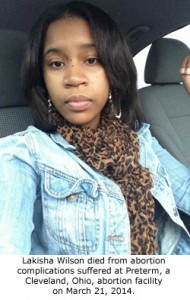 Newman’s staff discovered Wilson’s death after being alerted by a local pro-life activist to the fact that an ambulance had visited Preterm then followed up by obtaining 911 records that noted a patient had died. An Operation Rescue staffer later received a glut of documentation from a confidential source that revealed Perriera’s culpability in Wilson’s death.

According to those official, unredacted documents now in Operation Rescue’s possession, there was more evidence in Wilson’s medical records to indicate she was actually 23 weeks along in her pregnancy than there was to support the “19.4” weeks listed by Perriera, raising questions about the legality of Wilson’s abortion.

The records indicate that Wilson began to hemorrhage during her abortion on March 21, 2014. When her blood pressure began to suddenly drop, Perierra continued dismembering and removing parts of Wilson’s baby instead of stopping the abortion and tending to her patient.

The minimal efforts taken by Perriera to revive Wilson were unsuccessful. Records show she applied an ill-fitting juvenile-sized oxygen mask to Wilson that had to be replaced by EMTs once they were finally called, only to find upon their arrival that Wilson was not breathing at all and had not been for over 25 minutes.

Notations made by emergency responders with the Cleveland Fire Department indicated that responders were delayed in reaching the patient due to a malfunctioning elevator. When the elevator was finally working again, its cramped size forced EMTs to delay intubating Wilson and reinstalling an IV that had been pulled out in the “confusion” by Preterm staff, until they could extricate her from the building.

Records indicate Perriera was well aware of the dangerous, sporadically-functional elevator since emergency care had been delayed for a previous patient because the elevator was not working.

Officials at the Ohio Department of Health and Ohio Medical Board quickly concluded that complaints filed by pro-life groups against Perriera were “unsubstantiated” while their own records indicated something else entirely. In fact, those records showed they were well aware of Perriera’s negligence and dangerous conditions at Preterm. A letter of complaint to State Attorney Tim McGinty seeking a criminal investigation has been ignored.

“It is beyond disgusting that Perriera would be handed an award and a promotion after what she did to Lakisha Wilson. These despicable actions reveal how abortion groups are more concerned about protecting their dwindling number of abortionists than they are about the lives of the women they falsely purport to serve,” said Newman. “We are more than disappointed that in this case, not only did the system fail to work, but actually helped perpetuate unsafe conditions and shoddy practices that continue to place women’s lives at risk.”