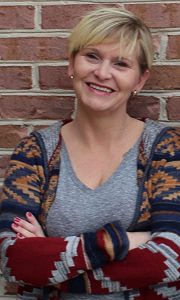 When Cornelia Jude came home drunk from clubbing at 5:00 a.m., she would see her husband sitting on the bed, praying, and she hated him for it. “I would get so mad” she says on a CBN video. “I felt like that was his way of trying to manipulate me.”

Cornelia felt like all men were manipulators ever since her mom’s boyfriend sexually abused her as a child. “I didn’t tell my mom in the beginning because he manipulated situations,” she says. “She always believed him. She never believed me.”

Born in Germany, Cornelia was the victim of sexual abuse from 12 years old. When she grew older, she started sleeping in the park with the homeless, taking drugs and alcohol, and cutting herself as an emotional release to ease the inner torment.

At 18, she escaped home by marrying, but her young husband was also a drug addict who beat her so badly that she had to have her teeth fixed by a dentist. “The beating was better then the sexual abuse,” she says.

After four months of marriage, she left her husband. She met and married an American and followed him to the United States. But her second attempt at happiness was also far from a fairytale. “He was out all the time drinking,” Cornelia says. “I don’t know how many times he cheated on me during that time. I was cool with it. I was fine with it. I wasn’t being sexually abused. I wasn’t being beaten.”

Cornelia began to suffer panic attacks, nightmares and breakdowns. A therapist diagnosed her with PTSD. “I isolated myself a lot and really really cried a lot,” she says. After two years, she left with her two children. “I always said there was no God because there’s no way he would allow one person to go through all of this,” she remembers with tears. For five years, she raised her kids alone and numbed her pain with drinking.

Cornelia met a man named Lawrence and they had a daughter together. Lawrence had some experience with God and tried to set a good example for his new wife, but Cornelia didn’t readily give up her vices. “I was out drinking and clubbing, and Lawrence was home with the kids most of the time. Sometimes I would come home at 5:00, 6:00 in the morning and I’m still drunk and I’ll see him, he’ll sit on the bed and he’s praying.”

After years of abuse from manipulative men, Cornelia assumed her current husband was just manipulating and she resisted.

God finally moved in her life in 2015. She got the sudden urge to “check out” a little church she noticed during her commute. However, the devil would not give up without a fight and she thought: “I’m not going to go in there. Why would I go in there?”

But the inner prompting persisted. So one day she suggested to her husband that he accompany her. The long-praying Lawrence was floored by a sudden change of attitude in his wife. “What?” he responded, disbelieving the words coming from her lips.

She met with the pastor after the service and he explained to her that forgiveness was the key to escaping alcoholism. “I choose to forgive. I choose to forgive,” he told her to say every time she had the urge to sin.

But forgiving was no easy matter. Cornelia pleaded with the Lord to help. At the next service, the pastor asked congregants to write names on the whiteboard for prayer. Cornelia wrote the name of her mother’s boyfriend. “It was like somebody let go of my heart,” she says. “There was a switch in my brain and in my heart I didn’t see him as a monster anymore.”

Suddenly, she felt loved by God and turned her life over to Jesus and was born again. She stopped drinking. The nightmares and panic attacks ceased. “I needed forgiveness. If God gives me forgiveness, he could give it to anybody in this world because that’s what he wants to do. He just wants to give us all this grace and all this love and all we need to do is accept it.”

Do you need to help putting your past behind you? Maybe it’s time that you consider God’s grace and love and accept His forgiveness for sin that you’ve committed or that has been committed against you?

The Bible says that, God sent His only begotten Son, Jesus, to die for our sins, that whoever believes in Him would not perish but have everlasting life. (John 3:16) It also says, If you confess with your mouth, that Jesus is Lord, and believe in your heart that God raised Him from the dead, you will be saved. (Romans 10:9)  Give God your heart, allow Him to remove your transgressions, as far as the east is from the west (Psa 103:12), pray something like this:

Jesus, please forgive my sin. I know that you died for me and that you have a plan for my life. Please teach me your ways and help me to live my life for you, free from the fears of this world and the next. I want to be ready for eternity with you. Amen