After 52 Attacks on Pro-Lifers in 46 Days, FBI Finally Opens Investigation 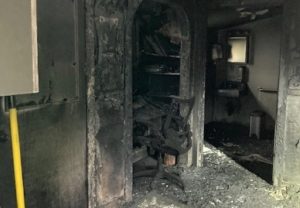 (Washington, DC) – After weeks of silence from top law enforcement officials in the Biden administration following an explosion of attacks against churches, pro-life organizations, and individuals over the last 46 days, the FBI announced on June 17th that it is now “investigating” the incidents.

In a statement, the FBI said that it would be investigating “a series of attacks and threats targeting pregnancy resource centers and faith-based organizations across the country.” The statements reads:

The FBI is investigating a series of attacks and threats targeting pregnancy resource centers and faith-based organizations across the country. The FBI takes all threats seriously and we continue to work closely with our law enforcement partners and will remain vigilant to protect our communities. We would like to remind members of the public that if they observe anything suspicious or have information about potential threats to report it to law enforcement immediately, call their local FBI field office, or submit a tip to tips.fbi.gov.

Notably, the statement does not specify whether “faith-based organizations” includes churches and places of worship, which have been the victims of at least 15 pro-abortion activist-related attacks in the same 46-day timeframe.

In response to The Washington Stand’s request for clarification on whether the investigation would include attacks directed at churches, the FBI responded, “We don’t have additional details to provide.”

Pressure has been steadily building over the last week on the Biden administration to take action after a seemingly non-stop rash of vandalism and property destruction. A coalition of nine conservative leaders recently sent a letter to the Department of Justice demanding action. This was followed by a strongly-worded letter from Sen. Tom Cotton (R-Ark.), the ranking member for the subcommittee on Criminal Justice and Counterterrorism, demanding the resignation of Attorney General Merrick Garland over the DOJ’s inaction. In a Friday tweet, GOP members of the House Homeland Security Committee expressed frustration, noting that the FBI’s investigation was “well overdue.”

“This extremist behavior threatens our homeland security which is why Homeland GOP is demanding answers from [the Department of Homeland Security] on its response efforts,” the Republican members stated.

The pro-abortion extremist group known as “Jane’s Revenge,” which has already claimed responsibility for multiple arson and vandalism attacks on pro-life organizations, published a letter on Tuesday declaring that “the leash is off” as it vowed to continue attacks.

The latest incident occurred on Tuesday, when the Minneapolis office of Minnesota Citizens Concerned for Life was smeared with graffiti and had windows smashed in.