(WNS)–Kenyan pastors have renewed calls to be allowed to carry firearms following the killing of a church official in Mombasa, but a lawmaker has rejected the plea. 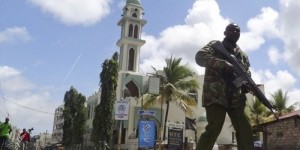 Speaking after a meeting with Mombasa deputy county commissioner Salim Mahmoud, the pastors said they needed to carry weapons for self-protection against religious opponents, an apparent reference to suspected Muslim extremists who have attacked churches and Christians in the recent past. In the latest incident this past Sunday, gunmen on a motorbike shot dead an assistant pastor at the Maximum Revival Centre before escaping. Police have yet to arrest the assailants.

Christian leaders made a similar request in October 2013, soon after the killing of two evangelical pastors inside their churches. Mombasa churches currently receive police protection during services.

Christian leaders blame the increased attacks on the radicalization of Muslim youth. The attacks have occurred amid protests by Muslims that Kenya’s war on terrorism targets them unfairly.

Church leaders Bishop Lambert Mbela, Bishop MacDonald Kitwa of Good News Evangelical Centre, and Jeremiah Goodison met with the government to make the request. Their plea reflects a growing frustration with rising insecurity in the country and the coastal area in particular.

Lawmaker Alice Wahome, a member of the Administration and National Security Committee in Kenya’s National Assembly has rejected the request, saying it would increase lawlessness in the country. She said the government needs to improve security in general and increase firearms for police officers instead of arming individuals.