AIPAC And The Treaty; An Illustration Of The Demise of Democracy

August 25, 2015 “Information Clearing House” –  The great issue of the day, the approval or rejection of the nuclear treaty with Iran, illustrates the demise of democracy and just how far “democracy” has fallen.  The treaty issue can also be used to demonstrate the death of the US Congress as a representative body, as a result of having sold their collective soul to a special interest group, while forsaking the American people. 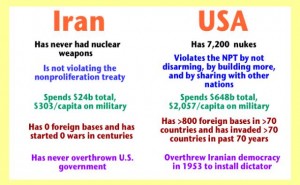 The nuclear treaty with Iran is a no brainer.  The American public support it, the world supports it, nuclear experts support it, all 5 nations who helped in the treaty negotiations support it, and any time a treaty limits the spread of nuclear weapons it is a good thing for all of humanity. Yet despite almost universal approval, it is having a very difficult time in the US Congress.  No one has given a rational reason for the rejection of the treaty, simply because there isn’t one.  The opponents are basing their arguments on irrational and untrue statements made to frighten the US public. At the risk of redundancy, not one logical or rational reason has been presented for rejection, yet opponents keep at it, with errors of omission, exaggeration, and outright lies.  President Obama has meekly challenged opponents by asking them to explain their alternative to rejection. It is war. Those who want to reject the treaty, want a war between the US and Iran, and that is their purpose.

Any political expert would confirm, the strongest lobbying group in the nation, is by far AIPAC, a group that represents the right wing interests of Israel.  AIPAC has become a right wing extension of the Netanyahu government, and certainly does not represent all American Jews, as polls show most American Jews support the treaty, but AIPAC has the clout, power, and money to force folks into line. AIPAC has exposed itself to the US public by being the only group who is opposed to this treaty. The treaty would be a great thing for the world’s people and the US public, yet Congress is having a great deal of difficulty doing what is best for the US public and for the world.  Instead, it is bending over backward to please AIPAC, and in doing so is not representing the US public.  Placating AIPAC, by voting against a treaty that is for the good of the US public, could, and should be, viewed as treasonous.

When an alleged democracy fails to represent its people, and do what is best for the world, to placate a special interest lobbying group, there is no democracy.  Congress has sold itself out to one special interest group who represents a right wing political leader of a foreign nation at the expense of its own citizens. You, the citizenry, are being sacrificed for campaign contributions. That is not democracy.  Former President Jimmy Carter, nailed it recently in a public interview, which went relatively unreported by mainstream media when he said: “Now it’s just an oligarchy, with unlimited political bribery being the essence of getting the nominations for president or to elect the president. And the same thing applies to governors and U.S. senators and congress members. So now we’ve just seen a complete subversion of our political system as a payoff to major contributors, who want and expect and sometimes get favors for themselves after the elections over. … The incumbents, Democrats and Republicans, look upon this unlimited money as a great benefit to themselves.” Has your Senator sold you out to a lobbying group who represents a right wing party of a foreign nation? Why would you vote for him/her?

Joe Clifford is a frequent contributor who lives in Rhode Island.