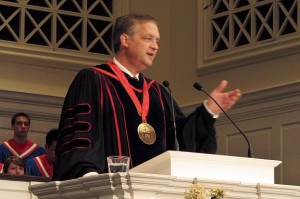 (WNS)–The Southern Baptist Convention with 15 million members is the largest Protestant denomination in the country. The Southern Baptist Theological Seminary in Louisville, Ky., is its oldest and arguably most influential seminary. Albert Mohler has been president at Southern Seminary for more than 20 years, but when he arrived there as a young man still in his 30s, he had a huge task before him. The seminary had taken a hard, left turn in liberalism, and his job was to do no less than purge the school and restore it to its biblical, Baptist roots.

Say a bit about the war for the soul of the Southern Baptist Convention that you joined when you came to Southern Seminary. I grew up in what we would call a tall-steeple Southern Baptist Church—very traditional, a brick church with the big pipe organ and all the rest. It was very much a part of the leadership structure of the Southern Baptist Convention, very faithful in its ministry. But, quite frankly, that church was also part of a denomination that was becoming increasingly non-theological and was losing its moorings and was also facilitating outright theological liberalism in the seminaries and many of the programs and agencies of the denomination.

I came to college in 1978 in a state Baptist college. The election of Adrian Rogers as the first conservative candidate the SBC elected in the conservative resurgence was in ‘79, so I really grew into adulthood as that controversy was taking shape, and I had to figure things out in a hurry. I figured out in a hurry that I believed in the narrative of Scripture. I figured out in a hurry that I did believe that very serious theological issues were at stake. I didn’t figure out so fast how the SBC issue should be finally won and hammered out. It took me some time to see exactly how those issues were playing out in the Southern Baptist Convention. It required me to shift allegiances from the pastor and his friends who had very much been a part of contributing to my life for all my boyhood to a very different set of people.

A core tenet of the SBC is the autonomy of the local church. How did you reconcile that tension between individual churches that tended toward liberalism but were nonetheless asserting their Baptist claim to autonomy of the local church? We do believe in the autonomy of the local church, but we also believe in the autonomy of the Convention. The Convention has the right to set its own expectations for membership. Those churches who associate together in the Southern Baptist Convention have not only the right, but every responsibility to determine the churches with whom they want to be in cooperation and do this work. … The Southern Baptist Convention was being quintessentially Baptist when it said, we’re going to take our stand here. These are going to be the parameters of our cooperation. If you’re within those parameters, we’d love to have you. If you’re outside those parameters, you need to join with a Baptist denomination or do whatever that fits your convictions, but not here.

A part of that larger struggle was the struggle taking place right here in Louisville when you got here 21 years ago. I came here as a student in 1980. When I arrived, this was the bastion of moderate superstructure of the Southern Baptist Convention. This is the mother seminary. It is “The” Southern Baptist Theological Seminary. That definite article has been a part of its name since 1859. This is a school that started to move in a leftward trajectory in the very early years of the 20th century, but it did so in ways that were rather imperceptible. … You can move left incrementally and the SBC had allowed this seminary to do that from at least the 1920s forward.

I arrived in the 1980s. I was starry-eyed. I loved the school. I had been sent here by my pastor and by my state college professors who loved the school or products of the school. There was so much here to love when I arrived as a student. This was a very happy place. There were wonderful things going on here, wonderful scholars. The problem is, they were theologically marching off the map. It wasn’t that I arrived at an unhappy place. I loved it here. It’s that what I heard in the classroom I knew just wasn’t right. … When I came back as president in 1993, I was a part of a much larger movement to recapture the whole SBC. I had the opportunity to articulate much of that vision and to make very clear what I believed needed to take place, not just in the seminaries, but in this seminary. I was elected to do that, and it was a very difficult process, but the Lord allowed it to be successful. Now, 20-plus years later, we’ve been able to build the seminary that I wish I had the opportunity to attend.

What were some of the initial steps? When I said the SBC was exercising its right to say, if you’re inside these parameters please stay, if you’re outside these parameters you’re going to have to go, that’s exactly what I had to say here to the faculty. If you’re inside the parameters then stay, if you’re outside those parameters then by your own admission of being outside those parameters you need to go. This isn’t a Fortune 500 corporation hiring by secular standards. This is a confessional, theological seminary. Every professor here from 1859 forward has signed to teach in accordance with and not contrary to our confession of faith. That confession of faith is unchanged, so if they were outside that confession of faith, they were outside what they had pledged sacredly to abide by. The difficult thing was having to say, “go.” That was not easy. It’s never easy. It was absolutely necessary. If I had to do it again, we’d have to do it again, but that’s not the kind of experience I would wish upon anyone. 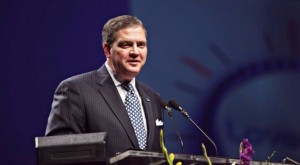 One of the things that happened here after that was some people embraced reformed theology more than others. You happen to be one of those who has embraced reformed theology. Talk about your growth out of a Baptist church toward someone who would characterize himself as a reformed theologian. I just want to remind us all that the Southern Baptist Convention was obviously born in that kind of reformed self-consciousness. Our confession of faith is extremely reformed, explicitly reformed. The framers and founders of the Southern Baptist Convention in 1845 were overwhelmingly, self-consciously holding to the theology that will be described as reformed.

Of course, they were Baptists, as I am adamantly a Baptist. We’re not Presbyterians, but in terms of our understanding of how salvation works in the larger superstructure of theology, we are now, as we were then, very, very close brothers, and for that I’m very thankful.

Some of your comments on contraception and childlessness have created controversy. Talk about your position on those issues. In the Bible, childlessness is always discussed as something that is grievous and a cause for sorrow rather than a cause for joy. There are purposes for which people were childless in the Bible, but that’s much like what Paul argued in I Corinthians 7 about someone who was unmarried. You’re unmarried for a purpose that is tied to the gospel. The idea that healthy married people, a man or woman who are married together would choose childlessness just as a lifestyle is alien from the Scripture. If that’s controversial, just try to find any hole in that argument from the Bible. I don’t think you’re going to find it. In fact, I’m confident you won’t.

Contraception is not as easy of a question to answer as you might think or people might want. The Roman Catholic Church has an easy answer, and that is no to any kind of artificial contraception. Quite frankly, their definition of natural stretches the imagination of what natural means. What we do need to recognize is that evangelicals just joined the contraceptive bandwagon unthinkingly, unreflectively, and, I think, unfaithfully, and just thought that any pill had to be a good pill. It has unleashed far more sorrow than joy in this world and has led to an understanding that babies are now simply an elective accessory and has made every pregnancy a tentative pregnancy. You have to put that alongside the availability of legal abortion. By the time you put together the triumvirate of no fault divorce, the availability of contraception, and the availability of abortion on demand, what you have is a situation that has just completely transformed the value of life as recognized by this society.

The evangelical, non-denominational megachurch has risen in the last 30 years or so. While there are some examples of faithfulness within that movement, there are also examples of lack of authority and lack of accountability moving those churches away from faithfulness. I think so. Lack of accountability is not just in terms of the structures of church officers and financial accountability and institutional accountability, but it’s theological accountability. Where’s the confession of faith? Where’s the connection to a comprehensive understanding of the Christian faith that intends to be consciously continuous with the faith of the apostles? Where is that? In most of these churches, it’s simply absent. The size of the church isn’t the problem. There are some wonderfully faithful, really big churches, and some of them are rightly called megachurches. But the megachurch model, which means the attractional model—we minimize theology in order to maximize the crowd—that’s a huge problem. I also think it’s a passing fad. I think that fits cultural Christianity, which is fast disappearing in a secularizing age.