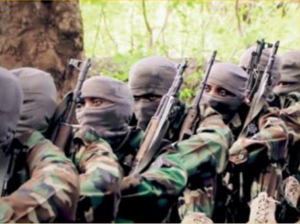 Somali-based Islamist group Al-Shabaab often target Christians. Al-Shabaab are known to make extensive use of child soldiers and the group is reported to have recruited children as young as nine

A spokesman for the Al-Shabaab terror group active in Somalia declared coronavirus as a “punishment visited by Allah upon the disbelievers” in an audio message reported on 27 April, as 38% of Somalis recorded as viewing the pandemic through a “religious lens”.

As the number of confirmed coronavirus cases in Mogadishu began to climb, the militant, known as Ali Dhere, called on Muslims to gloat about the “painful torment” inflicted on any non-Muslims who contract Covid-19 and have no sympathy for those who are ill.

Ali Dhere accused the African Union peacekeeping mission (AMISOM), which supports government forces combatting terrorism, and other foreigners in Somalia, of spreading the virus and called for their expulsion from the country in order to contain the pandemic.

He went on to mock government lockdown measures intended to contain the epidemic, describing the closure of mosques and Islamic seminaries as “sinister”. The militant closed by inciting Muslims to “join the war against unbelievers” and work towards the end of democracy and implementation of sharia (Islamic Law) in Somalia.

Meanwhile, a survey conducted by Africa’s Voices Foundation (AVF) in March, found that around 38% of Somali respondents had strong faith-based views of how to respond to Covid-19, such as calling for prayer, and viewed government and medical advice as secondary. About 10% of those who responded, particularly among displaced people, held views based on rumour or stigma, such as blaming “non-believers” and foreigners for the pandemic.

Sharath Srinivasan of the AVF called for government communications on Covid-19 prevention measures to be made with a dominant “religious framing”. “Especially in Ramadan [which began on 24 April], people are turning to faith first, so any messaging needs to be with and through the sources they trust,” he said.