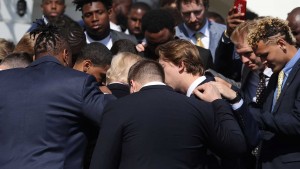 Members of the University of Alabama football team prayed with President Donald Trump on Tuesday afternoon as they made their ceremonial visit to the White House as winners of the 2017–2018 College Football Playoff National Championship.

During the Trump presidency, visits by championship sports teams to the White House have seemingly been marred by the fact that some high-profile athletes haven’t made the trip to the executive mansion to protest the president.

However, the Crimson Tide’s visit to the White House on Tuesday to celebrate their 26-23 Jan. 8 victory over the University of Georgia could likely be remembered for the fact that a handful of players huddled around the president to pray for him and the administration.

According to WBRC sports reporter Christina Chambers, the prayer was the idea of Alabama punter JK Scott. Chambers reports that when the punter went to shake Trump’s hand following his ceremony, he asked the president if he could pray with him.

After that, other players gathered around to join in the prayer. “What a cool moment!” Chambers wrote in a tweet. .@AlabamaFTBL JK Scott asked@POTUS if he could pray for him and his staff. Chambers also shared a video of the moment.

Scott, one of the top college punters in the nation and a senior from Colorado, is also affiliated with the Fellowship of Christian Athletes, a nonprofit ministry that seeks to “lead every coach and athlete into a growing relationship with Jesus Christ and His church.”

“My identity is in Christ, not in football, and that changes everything,” Scott has been quoted as saying. “When I truly believe what He says about me, nothing else really matters. My boldness and courage come from that.”

According to the blog SEC Country, which covers the Southeastern Conference, “Scott was one of the more spiritual players on Alabama’s team throughout his career.” According to the website, he was regularly spotted near midfield during warmups praying with teammate Minkah Fitzpatrick.

“Coach Saban addressed it and just said, ‘Hey, we’re doing this regardless of your political thoughts. We’re going, just to celebrate this team. It’s an honor. And just to be able to say that you’ve gone to the White House is something that you can cherish forever,'” offensive lineman Ross Pierschbacher said, according to Al.com. “So that was basically the extent of that.”

Running back Damien Harris agreed that visiting the White House is an honor. “It’s something that comes with being national champions, so we’re definitely thankful for the opportunity,” he told Al.com. “There’s a lot of young guys that haven’t been able to make that trip yet. We’re glad we’ve got guys that can go for the first time and experience it the way that we did when we were young. Obviously, all the older guys have been there, and we’re looking forward to going back again.”

In his speech, Trump congratulated the program, which has become one of the most premiere college football programs in the nation. He also praised head Saban and Athletic Director Greg Byrne.

Trump could not make it through the speech without praising the fact that he won the state of Alabama in the 2016 presidential election.

Saban, who has won six national championships as a head coach, earned his own headlines from the meeting over the fact that he took time out of the White House experience to call high school recruits.

“Anyone who wants to know how Alabama does it should study Coach Saban’s simple philosophy — it’s called the process,” Trump said in his speech.