All aboard the Trump Train 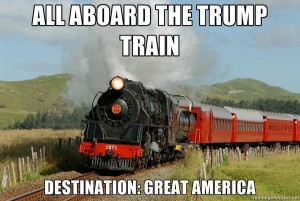 Our next President will be either Donald Trump or Hillary Clinton. This choice should be an easy one for every Republican. Unfortunately, some are vowing to help elect Clinton, a morally corrupt, scandal ridden, incompetent liberal who would do tremendous harm to the nation. This is an unacceptable outcome, one that might very well destroy what is left of our once great nation.

In fact, conservatives should be celebrating that a candidate with a good number of conservative positions is on track to win the Republican nomination. It is the best result for conservatives since the 1980s. Ever since Ronald Reagan left office, conservatives have been on the losing end of the GOP presidential nomination battles.

In recent decades, the winning candidates, George H. W. Bush, Bob Dole, George W. Bush, John McCain and Mitt Romney, have been moderates with scant conservative credentials. In each nomination contest, the supporters of the losing conservative candidates have been told to “hold your nose and vote for the nominee.”

Most conservatives followed that advice and supported these nominees, who in many cases held similar views to the Democrats. The results were clear; moderates are poor candidates because, in five of the last six elections, those nominees lost the popular vote.

In this election, the tables have turned as all of the establishment and moderate candidates lost, while maverick conservative Donald Trump easily prevailed. He won hundreds more delegates, millions more votes and almost three times as many states as his nearest competitor. Despite his popularity with the grassroots, as a populist conservative, Trump is anathema to the Republican Party establishment.

Not surprisingly, many in the GOP elite are not “holding their nose” and supporting Trump. They are refusing to return the favor to conservatives and support the nominee. Recently, it was announced that McCain, Bush Sr., Bush Jr. and Romney will skip the Republican convention in Cleveland. Both Bush Presidents had the good manners to refrain from criticizing Trump; however, Romney pilloried Trump in a 20-minute hate filled speech in March. He then proceeded to go on multiple talk shows trashing the front runner, so it is no surprise that the three-time loser Romney is refusing to support a first time winner, Donald Trump.

In addition, House Speaker Paul Ryan is still refusing to commit to supporting Trump, even though he will be presiding over the convention. Ryan said he was “just not ready” to endorse the presumptive nominee. This unusual declaration was blasted by former House Speaker Newt Gingrich who said that Ryan had an obligation to unify the party.

It seems that many establishment Republicans and conservative Cruz supporters, as well as scores of analysts, commentators, talk show hosts, politicians and columnists are exploring options such as not voting, supporting Hillary Clinton for President or a third party candidate.

This week, former Bush advisor Mary Matalin announced she was leaving the Republican Party for the Libertarian Party, but at least she did say she was open to voting for Trump.  Other angry Republicans have ruled out supporting Trump and are circulating an idea to form a third party. Blogger Eric Ericson and Nebraska Senator Ben Sasse among others are openly calling for a new conservative party to be formed. Clearly, such a party would have no chance of victory and would only help Hillary Clinton become the next President.

While Trump may have changed his mind on abortion and other issues, he is on the right side on the major issues of the day, such as immigration, trade, taxes, energy, 2nd amendment rights, rebuilding our military, defeating ISIS, judicial appointments, and many more.

The stakes in this election are extremely high. Voters will decide whether the country continues the Obama agenda or changes course. Hillary would be a continuation of Obama policies, while Trump would force a major course correction.

Trump is not perfect, but neither was Reagan. At the very least, he does represent a major defeat for the GOP establishment and every time they lose, it is a cause for celebration. Even better, a President Trump will have an opportunity to save our country from ruin and restore the once great promise of America.