On June 6, 2015 a historic ban on growing GMO crops went into effect in Jackson County, Oregon. The ban was the result of a ballot initiative in 2014, where citizens voted overwhelmingly to ban the growing of GMO crops in Jackson County, Oregon, by a 65.9% to 34.1% measure. This was seen as a significant victory, since the corporate opposition to the GMO ban spent over $1 million to try and defeat the measure.

Oregon is a major battleground in the U.S. over farming rights, and the problems of GMO contamination. The state of Oregon exports a large amount of their organic and non-GMO crops outside the U.S. to places in Asia, where countries like Japan and China either forbid or restrict the import of U.S. GMO crops. In 2013, when an Oregon farmer discovered unapproved GMO wheat in his field, presumably the result of field trials by Monsanto many years earlier, several countries banned the import of wheat from the U.S., bringing economic hardship on farmers in Oregon. 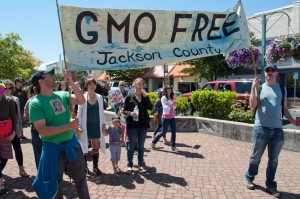 Just after the GMO ban ballot initiative was passed, two GMO alfalfa farmers sued Jackson County saying the GMO ban would cause them undue financial hardship and violated their constitutional rights. But a federal judge rejected their request to block the ban on May 30th. U.S. Magistrate Judge Mark Clarke ruled that the GMO ban is not pre-empted by Oregon’s “right to farm” law. The GMO alfalfa farmers still have a $4.2 million lawsuit in place asking for compensation due to damages they will allegedly suffer for complying with the ban.

With the apparent backing of the Oregon Farm Bureau President Barry Bushue, some state lawmakers tried to introduce legislation that would allow GMO farmers to be compensated or exempt from the GMO ban, but Oregon Live reports that the proposed legislation died in committee.

“I viewed it as a way to say, if you’re gonna change direction and ban someone, you should at least pay them,” said Rep. Brian Clem, D-Salem, the sponsor. “If you don’t want to co-exist, buy the guy out.”

However, the farmers of Jackson County who put together the ballot initiative to ban GMOs say they’re just trying to protect their crops and seeds, which are vulnerable to GMO contamination in the narrow, windy Rogue Valley of Oregon. Oregon Live reports:

Even a minuscule amount of GMO seed can render a non-GMO farmer’s crop unsalable, said Elise Higley, director of Our Family Farms Coalition, a Jackson County group that pushed for the ban.

“If GMOs stayed on the land they’re planted on, we wouldn’t be having this problem,” Higley said.

Seed growers and non-GMO farmers in Jackson County said they resorted to the initiative after Syngenta representatives refused to reveal the locations of their test plots and stopped coming to Southern Oregon Seedgrowers Association meetings.

Other counties in Oregon are watching Jackson County closely (as is the whole country, if not the whole world!) to see what happens next. The ban went into effect this past Saturday (June 6, 2015), but Oregon Live is reporting that officials won’t be patrolling or making farmers destroy their plants yet. According to Oregon Live, the ordinance doesn’t require the county to enforce the ban; it just gives leaders the authority to do so.

Jackson County Farm Bureau President Ron Bjork estimates that about 2,000 to 3,000 acres in the county are used for GMO crops, primarily alfalfa and corn for animal feed.

“Those folks are not going to leave,” Bjork said. “You can’t tell if alfalfa is GMO just by looking at it. The county would have to go out and test it.”

The county’s Board of Commissioners will most likely wait to see what the outcome of the pending lawsuit the GMO alfalfa farmers have filed for compensation will be before they take any action.

In the meantime, non-GMO farmers seem to have a clear path to sue GMO farmers if their crops are contaminated by GMO crops, which would be a first in the U.S.