Alone Yet Not Alone, A Spectacular Movie

VISTA, CA (ANS) – Based on a terrifying yet true story Alone Yet Not Alone is a riveting historical drama with stunning cinematography and an inspiring message of faith. 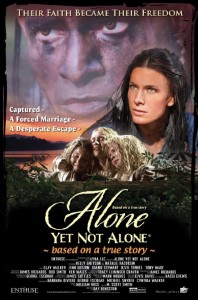 In 1755 a devout Christian family from Germany arrives in America with hopes to build a new life and practice their faith freely. Amidst severe hardships, they finally settle in the Pennsylvania colony where they strengthen their roots as a family through prayer and frequent Bible reading together. But they are soon caught in the crossfire of the French and American-Indian War and attacked. Amidst the violence, two of the children, sisters Barbara and Regina, are abducted and separated.

The girls are brutally enslaved by the Indians. They also suffer from adverse conditions in the harsh Ohio wilderness. But the greatest pain is that the girls are separated. Barbara is especially plagued by the fact that she’d promised to always be there for Regina. Heartbroken and scared, somehow she continues to cling to the Lord and hope.

Full of tension, tenderness and unexpected twists, this spectacular film has a powerful message about God’s faithfulness. Starring Kelly Grayson as the older Barbara Leininger, Natalie Racoosin as young Barbara, and a plethora of other fine actors, Alone Yet Not Alone is a must-see.

Alone Yet Not Alone is a fabulous movie and a DVD well worth buying. The DVD is now available at many retail outlets and VOD services.

Find out more about the film at www.aloneyetnotalone.com.

Editor’s note: At the Movieguide’s awards ceremony in Hollywood last February (2014), Joni Eareckson Tada performed the breakout song “Alone Yet Not Alone,” which had received widespread attention because its Oscar nomination was rescinded. Although the Christian-themed song from the independent film of the same name was no longer be honored as a nominee for Best Original Song at the Academy Awards ceremony on March 2, 2014, Tada’s performance of the controversial, hymn-like song at the Movieguide® awards aired nationally on the Reelz cable channel during Oscar weekend, March 1-3, 2014.