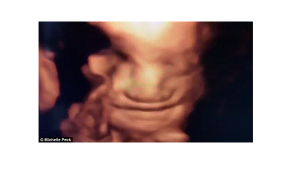 Baby Olivia’s smile lit up a room – before she even was born. The unborn infant recently delighted her parents, Jade and Andrew Herb, of Staines, England, as they watched her move around on a 4D ultrasound, the Daily Mail reports. And then, to their surprise and awe, she smiled.

Up until that point, the Herbs said Olivia hid from them during previous ultrasounds, and they felt disappointed that they could not see her. Olivia is their first child. The excited young couple decided to pay £140 for a private ultrasound with the hope that Olivia would cooperate, and they would be able to see her face.

“Every scan they’d had, the baby had been in an awkward position, so Jade decided to eat Haagen Dazs Cookies and Cream ice-cream because she’d felt lots of movement after eating it in recent weeks,” Jade’s mother Michelle Peck told the Mail.

Peck said her daughter and son-in-law were hysterical with joy when they saw Olivia smile. The unborn baby girl also moved her fingers and put her foot on her head as her parents and grandmother watched.

“It’s quite something to see your unborn granddaughter smiling before she’s even been born,” Peck said. “We’re happy people though so we weren’t surprised to see her grinning!”

Olivia’s due date is April 29, the family said.