America’s Racial Powder Keg: How a Violent Dependency State Has Been Created in the Black Community 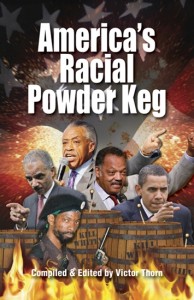 Compiled and edited by Victor Thorn. After being promised a “post-racial” America by Barack Obama, this nation has instead seen cities set ablaze, anarchy in the streets, police officers assassinated in cold blood and violence directed against innocent whites. Rather than trying to temper this outrageous behavior, Obama and his cronies, including former Attorney General Eric Holder, gave their none-too-subtle nod of approval by associating with the likes of Al Sharpton and Jesse Jackson. Spearheading a grievance industry based upon hatred of whites dating back hundreds of years, these race hustlers have become rich as their black followers spiral toward destruction. Thorn examines this phenomenon.