Imagine this: In the not-so-distant future, a large-scale electromagnetic pulse (EMP) attack on the U.S. energy grid wipes out all power in the country. Electronic devices cease to function. No more phones. No Internet. No TV. Credit cards become useless as the entire banking system grinds to a halt. Food, water and mere survival become every person’s primary concerns.

Movie director Mike Norris and producer Gary Heavin have imagined such a scenario and brought it to life in their new movie, “Amerigeddon,” set to hit theaters May 13. 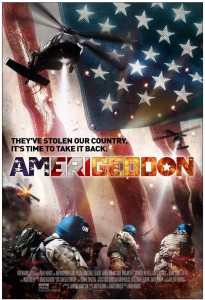 “Amerigeddon” depicts a dystopia in which the American government reacts to a debilitating EMP strike by declaring martial law and stripping Americans of their constitutional rights and their guns. And by the way, it was the U.S. government, in conjunction with the United Nations that staged the EMP attack in the first place.

It was a plot that none of the studios wanted to touch, so Norris and Heavin independently produced and financed the movie. In an interview with WND, Norris called it “a film of passion” that he and Heavin very much wanted to share with the world.

“We just decided we’re going to do it ourselves,” said Norris, the son of legendary actor Chuck Norris. “We said we’ll go take it to the theaters in areas that we think people would gravitate toward a film like this, and [hopefully] it’s something that resonates with people that believe in the First Amendment, the Second Amendment; people that believe in the Constitution, the Bill of Rights – this is a movie that was created just for them.”

Norris said the movie is unintentionally timely. The process began 18 months ago when Heavin wrote the screenplay. At the time, Norris and others thought Heavin’s plot was kind of crazy. But as they went through the filming process, they saw the U.S. moving more and more toward tyranny, and suddenly the film seemed very appropriate for the times. 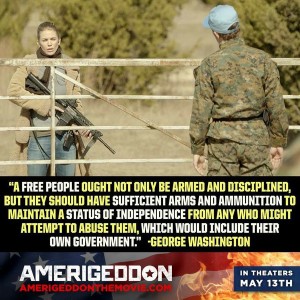 “We were just trying to get a message across that we feel the government is overreaching its authority; Obama is ruling from the bench, our rights are being infringed on a daily basis,” Norris said. “But it wasn’t until the movie’s done, we’re finished and getting ready to put it out that it just kind of all fell into place and just became very timely with what’s happening in the world. So, really, it was kind of on accident that this film is coming out at this time in our country.”

The story may be fictional, but Norris insisted all the important elements are based in fact, from the movie’s depiction of EMP weapons technology to the National Defense Authorization Act.

“Our film, as Gary likes to call it, it’s a true story that just hasn’t happened yet,” Norris said.

This movie is not mere entertainment; it’s also a warning, according to Norris. A powerful EMP weapon could throw the entire country into chaos. Norris said he does not know of any evidence of planned strikes against the power grid, but the possibility is real.

The movie portrays the EMP attack as a false flag, but Norris believes it could come from another source. He noted North Korean leader Kim Jong-un threatens similar attacks on a regular basis, making him a prime candidate to eventually snap and carry out a major attack on America.

Ultimately, though, the movie is less concerned with the strike itself than with the aftermath. “It’s not so much, should we be worried about an EMP strike?” Norris explained. “It’s what happens if we do have an EMP strike? Are we prepared for that?”

“I am not a full-on prepper,” Norris explained. “I’m not a hard conspiracy theorist, but I think people should on some level be prepared just in case something were to happen.”

He explained how he has prepared for an emergency: “I have guns, I have food, I have water all put away. Am I set up for a yearlong EMP strike that knocks out the power grid for a year? Not even close, but I have the bare essentials that could get my family and I through a month, and I do have a plan if it really gets bad, a place to go that is very well-stocked and very well-prepared.

“I would suggest for anybody just to have the bare basics – some rice, some beans, some water, sugar, and just pack it away real nice, put it away somewhere. If you need it, you’ve got it. If you don’t, thank God.”

However, preparedness is not the only message in “Amerigeddon.” Norris and Heavin also had much to say about America’s leaders. “Our film says our leadership, the establishment in Washington, is bought and paid for by the elites of the world, that one percent of the one percent,” Norris revealed.

Norris and Heavin did not name any of the global elites in their film, preferring to let viewers concoct their own theories about who exactly is pulling the strings behind the U.S. government. Norris said there is one line in which the global elite “puppet master” says to the president of the United States, “When you sell your soul, it’s a onetime thing; there’s no going back.”

Norris believes government corruption is commonplace in Washington, as Donald Trump has declared regularly on the campaign trail. He thinks it’s foolish for Americans to blindly trust their leaders. “The most ridiculous thing as an American we could do is bury our heads and think everything’s great, the world’s great, our leaders have our best interests in mind,” Norris warned.

He said he’s been glad to see many commenters on his film’s trailer affirm they see what’s going on, are fed up with government and are ready to stand and fight corruption. He also pointed to a recent poll that found fewer than one in five Americans trust the government all or most of the time. It’s all evidence of the awakening he believes is necessary.

“We’re at a tipping point, I believe, in this country,” Norris said. “We are at a tipping point, and it’s palpable, the feeling out there. You can just feel it. It’s thick and it’s nerve-wracking, and if I weren’t a man of faith and if I didn’t have my Christian values, I think I’d be running around like crazy freaking out over this.”

“Amerigeddon” is only the first in a series of planned films and TV projects through which Norris and Heavin hope to promote patriotic values and protect the country’s freedoms. Norris told WND the next project they plan to do will portray what the world would look like a year after an EMP strike. They also hope to explore what would happen if the banks declared a holiday in America as they’ve done in Greece.

“What happens here in America when the banks declare a holiday and 50 million Americans that are reliant on government services cannot get their food stamps, they cannot get their entitlement from the government?” Norris asked. “What’s going to happen one week after that happens? We’re going to have riots like crazy throughout the country. So I firmly believe that what our government wants is to create chaos in the United States, and it’s slowly but surely happening.”

He pointed to liberal billionaire George Soros and MoveOn.org and the organized chaos they have been causing lately, including disrupting Donald Trump rallies. He also cited Henry Kissinger’s suggestion that chaos is necessary to usher in a new world order.

It’s all nerve-wracking, Norris admitted, because it’s hard to believe the United States of America has come to this. “I was raised in the ’60s, ’70s and ’80s when America was the greatest place on Earth. We had the greatest generation as our grandfathers,” Norris recalled. “And I look now and I’m going, where is our greatest generation? Where is this America that we used to live in? It’s gone; it’s not there.”

For a list of theaters where “Amerigeddon” will be shown and for more information on the movie, visit the film’s official website.