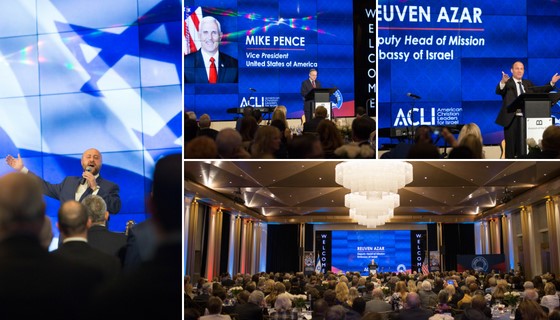 By Susan Michael – US Director ICEJ

With raucous applause and a standing ovation, the attendees of Israel: Seventy and Strong responded to the live-streamed remarks of Israeli Prime Minister Benjamin Netanyahu as he closed his official speech marking the historic opening of the US Embassy in Jerusalem. With a dramatic pause on each word, Prime Minister Netanyahu echoed a common phrase which on this day seemed to echo with even greater meaning, “God bless the United States of America and God bless Jerusalem, the eternal undivided capital of Israel.”

The sold-out event, in celebration of Israel’s founding and the move of the US Embassy to Jerusalem, began with a gala dinner on Sunday evening held at the beautiful, new Museum of the Bible. While there were many highlights to the evening, a letter from US Vice President Mike Pence and a video greeting directly from the Prime Minister himself, reminded everyone that our special marking of this day was noted in the highest halls of government. Keynote Speakers were Reuven Azar, Deputy Chief of Mission, Embassy of Israel in Washington, DC; and Gary Bauer, Washington Director of the CUFI Action Fund.

The nearly 400 person-strong crowd that assembled in our nation’s capital came from over 40 countries and included leaders from dozens of American Christian organizations as well as over 50 Millennial leaders, demonstrating that the movement of Christian support for Israel is global, broad-based, and is positioning itself for the future.

The celebration continued on Monday with expert sessions on assessing Israel and the Christian Zionist movement and learning how to better articulate our message and engage the Christian community for greater impact and future viability. The highlight of the day was joining together to celebrate during the live stream of the opening of the US Embassy in Jerusalem.

Time and again, the Christians assembled in unity were thanked from the stage for their tireless work over several decades that has culminated in the US Embassy opening in Jerusalem. It was a poignant reminder of the need for persistent prayer for our government, and grassroots efforts coupled with collaboration of leaders such as the ICEJ’s American Christian Leaders for Israel (ACLI) network.

We come away from the historic events of this week greatly encouraged with a renewed strength to press forward together in defense of Israel and the Jewish people worldwide.