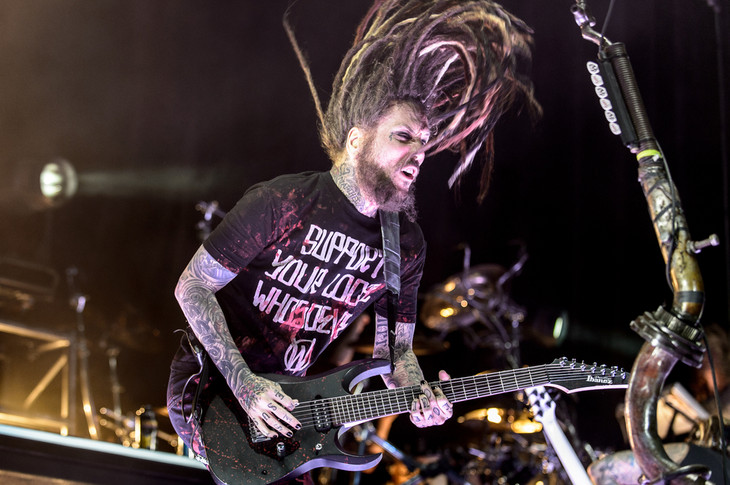 Brian, I want you to know that before I began writing this I prayed for you and your family. You may never read this, so I take solace in the fact that God will be listening to my prayers for you and he always answers according to His will. I also spent time praying for the entire band of Korn, who happened to have been, before I knew Christ, one of my favorite bands. I used to listen to you guys before wrestling matches in high school. I would blast it in my car while driving to a party. I even went with a friend to go steal your CD’s at the local Target store because I didn’t have any money to buy them when I was in middle school.

But after I came to Christ in 2009 I was no longer the metal head I use to be. I was shown worshipful music to listen to that would help to edify me in my new walk with Christ. Not long after that a brother in Christ told me of this rocker who had recently come to know Jesus. He told me that it was this guy, Brian “Head” Welch, who I was already well acquainted with. I knew of you as the guitarist from Korn, but to all these Christian friends you were now Brian “Head” Welch, the secular artist turned “Jesus Freak.” I watched your testimony online and was inspired by much of what you had to say in it. 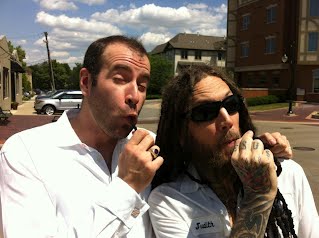 (Since then I have become aware of your alliances with John Crowder and his heretical New Mystic/”Jehovah-wanna” teaching – a play on words for Marijuana – but I am writing this for a purpose outside of speaking about his demonic influence.) I remember listening to one of your interviews where you said, “I wouldn’t go back to Korn, ‘cause that’s going backwards, I’m not gonna do that…” (Christian And Missionary Alliance, Buffalo, MN). So when I heard that you were going back, I was honestly upset. I couldn’t have been more stoked to know of a guy who I use to listen to, who GOT OUT! The Bible says “Come out from their midst and be separate” and you did it! And now, you are going to go back to play that music again?

When I heard your friend Ryan Ries on the Frank Sontag show, I knew I had to ask him why you would return to play with Korn. I called into the show and when it was my turn I proceeded to ask the following question regarding you and your return to Korn: “I thought that Brian had come out from their midst and been separate, but now he is going back. Can you explain to me why he would go back after being led to leave previously?”

Ryan went on to tell a couple of cool stories about praying with people after shows and all the good that is happening from it. But I honestly wasn’t convinced. The reason being, the Bible tells me that no bad tree can bear good fruit. I cannot clean my car by washing it with a handful of manure. In other words, we do not convert the lost by doing that which is evil. I don’t get high with drug addicts to try and reach them with the Gospel. I don’t get drunk with drunkards to reach the drunkards. I don’t lie to people to convince them to come into the kingdom. This is not how God has decreed His gospel to be spread.

So, I continued to research your reasoning and after watching your interview with WP Films about why you returned to Korn I was still unconvinced with your reasoning. In the interview you said that you thought and prayed about it and that you had an “inside feeling to talk to the management” who then gave you all the answers that you were looking for. Immediately I couldn’t help but be reminded of a time my wife and I were witnessing to a couple of Mormon missionaries who had come to our home.  After sharing with them for a couple of hours, one of the two “Elders” said to her, “Well, you just have to pray about it”. In response, she gave them a story that I would love to share with you. She shared with them how someone she knew told her she was going to pray about leaving her husband. Her husband had not been unfaithful and he had not deserted her either. She simply said she didn’t love him anymore and wanted the Lord to lead her in that direction. But guess how “god” answered her prayer? Contrary to His word, but parallel with her flesh.

How can I prove that the one true God is not the one who answered her prayer? Because it contradicts what God has already declared in His word. God is not the author of confusion, nor does He change His mind. When He has decided what is lovely, pure and true, the decision is final. No prayer that is asking for something contrary to His word is ever needed. We did not need to pray for a “burning in the bosom” and to be honest, you did not need to pray about returning to a band that is singing and glorifying that which is contradictory to God’s word.

Anyone interested in knowing the depth of depravity this band stoops to can search out the lyrics of these songs by the band. Faget, Ball Tongue, Need To and Clown.

I suggest searching these lyrics because it has been reported that Korn is playing its seminal first album in its entirety while on tour. I can’t print these lyrics because of how foul they are. One of the reasons Ryan Ries gave on Frank Sontag’s radio show as to why you felt comfortable going back was that you were going to have a lot more of the creative reigns on what was going to be sung. If that is true, this reason has now been made void. You are unfortunately singing many of the profane old songs.

What has God already declared about using such profane and perverse language? In the book of Hosea we see God listing the sins of the inhabitants of His land. Here is what is listed right next to deception and murder:

“Listen to the word of the LORD, O sons of Israel, For the LORD has a case against the inhabitants of the land,
Because there is no faithfulness or kindness, or knowledge of God in the land. There is swearing, deception, murder, stealing and adultery. They employ violence, so that bloodshed follows bloodshed.” Hosea 4:1-2

Do you really believe that the Holy Spirit is going to lead you to sing about things contrary to a Christian’s walk with Christ?  Jesus said that our words do mean something:

“But the things that proceed out of the mouth come from the heart, and those defile the man. For out of the heart come evil thoughts, murders, adulteries, fornications, thefts, false witness, slanders.” Matthew 15:18-19

And that we need to be careful as to how we speak because our words will be judged!

In the book of James we are warned not to be a double-minded man, one with a quick tongue that would bless and curse at the same time. He warned of the great power the tongue can yield:

“See how great a forest is set aflame by such a small fire! And the tongue is a fire, the very world of iniquity; the tongue is set among our members as that which defiles the entire body, and sets on fire the course of our life, and is set on fire by hell. For every species of beasts and birds, of reptiles and creatures of the sea, is tamed and has been tamed by the human race. But no one can tame the tongue; it is a restless evil and full of deadly poison. With it we bless our Lord and Father, and with it we curse men, who have been made in the likeness of God; from the same mouth come both blessing and cursing. My brethren, these things ought not to be this way. Does a fountain send out from the same opening both fresh and bitter water? Can a fig tree, my brethren, produce olives, or a vine produce figs? Nor can salt water produce fresh.”  James 3:7-12

When I came to Christ, I rejected all of the evil things that I committed against God. (Not that I am perfect, but even when I stumble I see that what I’ve done is wrong.) I knew that my lifestyle of drunkenness and fornication were an open offense to Him and I repented of doing such things. But you know what else I repented of? Listening and singing music that was an offense to Him. I stopped meditating on that which is contrary to His will and word. With that said, I want to know how singing some of the aforementioned lyrics are not an offense to the One who died for you? 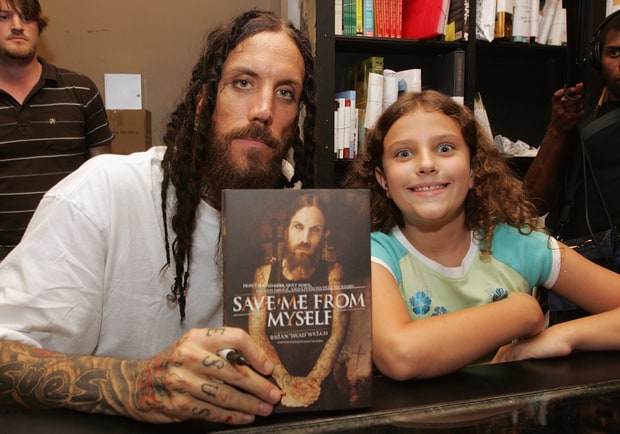 Brian Head Welch with Jennea in 2007

Another reason this is so troubling is that you knew better and felt guilty of perpetuating such filth. You once said that one of the main turning points in your life was an encounter you had with your daughter. “When I heard Jennea singing a Korn song called “adidas” it stands for “all day I dream about sex” it’s like a party song you know? When she sang that, you know she didn’t know what she was singing but it was like what am I doing to my kid, you know? I felt like a loser, like the biggest loser in the world. And that’s when around the time I started having those thoughts you know I’m no good for this kid, you know?”

While I am sure that having to hear your daughter sing such a perverse song had to be heartbreaking, I must honestly ask, how do you think God feels as his children sing your songs? Do you not think that it hurts God’s heart to hear His creation sing along to such perversity? Do you really believe that the Holy Spirit is leading you to be at the forefront of this procession of profanity? I do pray that you place yourself back in those shoes, hearing your daughter sing those songs, and remember that God is watching those whom He loves, those whom He sent His only Son to die for, singing songs of wickedness. 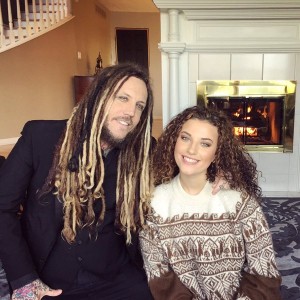 I am not writing this out of anger or jealousy or hatred, but rather out of love. I am genuinely concerned for your well-being and those who listen to you. I just cannot reconcile this music with a walk with Christ, and I encourage you to prayerfully consider what the Lord would have for you, according to Scripture.

I leave you with one last passage to consider:

“Therefore, consider the members of your earthly body as dead to immorality, impurity, passion, evil desire, and greed, which amounts to idolatry. For it is because of these things that the wrath of God will come upon the sons of disobedience, and in them you also once walked, when you were living in them. But now you also, put them all aside: anger, wrath, malice, slander, and abusive speech from your mouth. Do not lie to one another, since you laid aside the old self with its evil practices, and have put on the new self who is being renewed to a true knowledge according to the image of the One who created him.” Colossians 3:5-10