An Open Letter to Donald Trump from Privacy for All 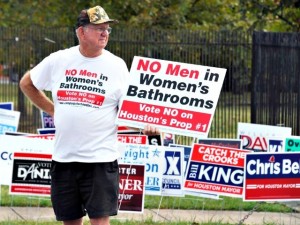 File – In this Oct. 21, 2015 file photo, a man urges people to vote against the Houston Equal Rights Ordinance outside an early voting center in Houston. On Tuesday, Nov. 3, 2015, voters statewide can give themselves tax breaks, pump billions of dollars into roads and make hunting and fishing constitutional rights by supporting seven amendments to the Texas Constitution on Tuesday’s ballot. And Houston will choose a new mayor and decide whether to extend nondiscrimination protections to its gay and transgender residents in a referendum being watched nationally. (AP Photo/Pat Sullivan, File)

SACRAMENTO, Calif. – The following is submitted by Privacy for All:

Recently you spoke out on an issue that is very important to many Americans: privacy in public bathrooms, locker rooms and showers.  These facilities have traditionally been sex separated and much of the public wants to keep that tradition.

The issue is unwanted exposure to and from those that are physically opposite. Sex separated bathrooms, showers and locker rooms prevent unwanted exposure. The policy you have embraced does not.

Penthouses and private planes allow a level of separation and privacy that does not exist for most of us down below. A 14-year-old girl changing her clothes in a public school locker room or a 12-year-old boy using a urinal may be extremely uncomfortable when a physically opposite person is sharing that space with them.  Will you help them avoid that discomfort? Or will you mock their modesty?

We have compassion for those that believe that biology has betrayed them. We acknowledge their discomfort in traditionally sex separated facilities.  As a society we have long made accommodations for some without violating the privacy of all.

There has been much talk about how your home-grown values are the same as those values in the rest of the country.
What we do with this issue could expose our bodies and will expose our values.