(WNS)–In 2014, Islamic State militants captured the Iraqi city of Mosul and bombed an ancient shrine that many believe contained the burial place of the Old Testament prophet Jonah. The tomb was located within a Sunni mosque near the site of the ancient city of Nineveh.

After Iraqi troops liberated Mosul in January, archaeologists were dismayed to see the extent of tomb’s damage—but then they discovered a priceless treasure. Buried beneath the shrine they found the 2,600-year-old palace of King Sennacherib of Assyria.

After the Islamic militants demolished the shrine with dynamite, they dug deep tunnels into Sennacherib’s palace and presumably looted hundreds of artifacts to sell on the black market. Experts assume the militants destroyed the shrine because they believe worship at such places violates the teachings of Islam. 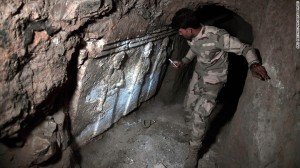 “I can only imagine how much Daesh discovered down there before we got here,” archaeologist Layla Salih told The Telegraph, using the Arabic term for Islamic State. “We believe they took many of the artifacts, such as pottery and smaller pieces, away to sell. But what they left will be studied and will add a lot to our knowledge of the period.”

The archaeologists found a marble inscription of Sennacherib’s son, Esarhaddon, that they believe dates to 672 B.C., when the palace was part of the city of Nineveh. They also found a stone sculpture of an Assyrian demi-goddess depicted as sprinkling the water of life to protect humans in her care, The Telegraph reported.

Since the1800s, experts have known Assyrian royal buildings existed beneath the shrine.

“Iraqi excavations in the 1950s revealed an entrance to an Assyrian royal arsenal, and in 1990 a large Assyrian building to the east of the mosque, guarded by colossal human-headed winged bulls, was excavated, but this work came to an end with the Iraq/Kuwait war,” Paul Collins, chair of The British Institute for the Study of Iraq, told Fox News.

Sennacherib was the king of Assyria from 705 to 681 B.C. According 2 Kings, Sennacherib’s army captured many cities in Israel’s southern kingdom of Judah and in 700 B.C., during the reign of King Hezekiah, unsuccessfully attempted to overtake Jerusalem. The Medes partially destroyed Sennacherib’s palace when they attacked Nineveh in 612 B.C.

In the days of the prophet Jonah, Assyria’s capital in Nineveh was one of the richest cities in the world. God commanded Jonah to go to Nineveh to warn the people of coming judgement. When Jonah refused and tried to run away, God commanded a big fish to swallow him and vomit him onto a beach three days later. After that, Jonah went to Nineveh, where the people repented after hearing his message.

According to some Christian, Jewish, and Islamic traditions, Jonah was buried in Nineveh. Eventually, a church called the Monastery of Jonah was built over the tomb. Muslims constructed the current shrine on the ruins of the church in the fourth century. They closed the shrine to Christians in 1902.

Archaeologists now exploring the site fear the new tunnels dug by militants are in imminent danger of collapsing.

“If this happens, the result will be even more destruction at a site that had already been devastated by the explosions that destroyed the ancient Shrine of Jonah, in effect we will lose a place where Iraq’s ancient, medieval, and modern cultural heritage rests one above the other,” Collins told Fox News.