(WNS)–Once again a new archaeological discovery has supported the accuracy of the Bible and proven skeptics wrong. This time the discovery came from a most unlikely source—ancient animal dung.

The Old Testament describes the wealth of King Solomon, his many building projects, and his finest architectural accomplishment, building the temple in Jerusalem. The temple was an elaborate building adorned with much gold and bronze. It also held many bronze furnishings and implements used in worship. The account in 1 Kings 7:13-14 notes Solomon summoned a man from Tyre who was an expert worker in bronze to complete the temple’s metalwork.

To build the temple, Solomon would have had to mine huge amounts of copper to make the bronze alloy. But archaeologists were unable to locate any evidence of such mines until the 1930s, when American archaeologist Nelson Glueck announced he had found them while exploring the copper-rich Arabah Valley, an area that stretches from the Red Sea to the Dead Sea between modern Israel and Jordan, National Geographic reported.

“These [mines] were intensely worked in ancient times, particularly during the time of King Solomon,” Glueck wrote in the February 1944 issue of the magazine. 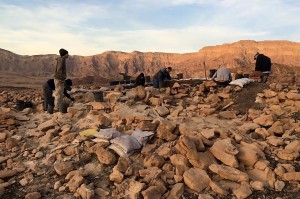 But critics quickly discredited Glueck’s faith in the Bible’s accuracy. They argued David and his son Solomon weren’t powerful kings and were incapable of organizing a major mining operation or long-distance trade.

“Glueck became a laughingstock in the scholarly world,” said Thomas Levy, professor of archaeology at the University of California.

“Until we started the project in 2013, this was considered to be a late Bronze Age site related to the New Kingdom of Egypt in the 13th and early 12th centuries B.C.,” Erez Ben-Yosef, a University of Tel Aviv archaeologist who began excavating the site several years ago, told National Geographic.

Archaeologists had to dig through more than 20 feet of copper slag, waste produced when smelting or refining ore, to reach virgin soil, indicating someone produced metal at the site on a massive scale.

Last year, archaeologists at the site excavated animal excrement they assumed was of recent origin. But much to their surprise, high-precision radiocarbon dating determined the dung to be 3,000-year-old excrement from donkeys and other livestock. Further analysis of textiles and other organic material at the site showed the mining camp’s zenith was the 10th century B.C.—the time of King David and King Solomon.

The arid climate had preserved the dung samples so well that they still contained intact seeds and pollen spores. Analysis of the plant material proved feed for the animals had been imported from an area more than 100 miles north of the site, about a two-week trip by donkey in ancient times. The discovery supports the Biblical description of Solomon engaging in long-distance trade.

Archaeologists have now uncovered more than 1,000 tons of smelting debris at the site, indicating it was an industrial-scale mine.

“Until recently we had almost nothing from this period in this area,” Ben-Yosef told National Geographic. “But now we not only know that this was a source of copper, but also that it’s from the days of King David and his son Solomon.”