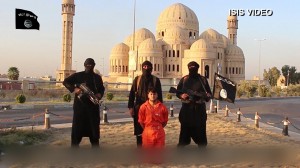 In northern Syria near the Turkish border lies the relatively small, nondescript town of Dabiq, home to about 3,300 people. It came as somewhat of a surprise last August when ISIS suddenly targeted the city, which seemed to have little strategic importance.

But some may not have realized Dabiq figures prominently in Islamic eschatology – somewhat analogous to Armageddon in the Book of Revelation. It seems the ancient Hadith, which contains the teachings and deeds of Muhammad, prophesied that in the “last hours of history” the forces of Islam will face a horde of infidels at Dabiq in a decisive battle presaging the return of their Messiah.

The importance of this prophecy to ISIS was revealed in the recent video released November 16th announcing the beheading of American aid worker Peter Kassig.

“Here we are, burning the first American crusader in Dabiq, eagerly waiting for the remainder of your armies to arrive,” declares an ISIS fighter in the video. The militant condemns U.S. involvement in Iraq and pledges to defeat “this final and last crusade.”

It may seem incredible to some that ancient prophecies delivered 1,400 years ago have guided the rise of ISIS and continue to propel their recruitment of young fighters in the Middle East, Western Europe, and beyond.

“Dabiq is the most important village in all of Syria for them…especially the foreign fighters,” a rebel who fought against ISIS told the Wall Street Journal. “They take it (the prophecies) very seriously,” he said.

Hadith 6924 states: “The Last Hour would not come until the Romans would land at al-A’maq or in Dabiq. An army consisting of the best (soldiers) of the people of the earth at that time will come from Medina (to counteract them)…They will then fight and a third (part) of the army would run away, whom Allah will never forgive. A third (part of the army) which would be constituted of excellent martyrs in Allah’s eye would be killed and the third who would never be put to trial would win and they would be conquerors of Constantinople.”

Wiles Fraser, writing for The Guardian, noted that ISIS is selective in its use of the Hadith. “For instance, other parts of the tradition have it that Jesus, dressed in yellow robes, will return east of Damascus and will join forces with the Islamic messiah, the Mahdi, in a battle against the false messiah, the Dajjal. After the death of the Mahdi, it is the Muslim Jesus who will rule the Earth. This hadith is less useful to Isis, though its leader, Abu Bakr al-Baghdadi, looks to many observers to be trying to style himself as the Mahdi.” 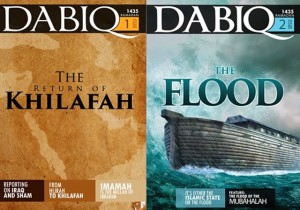 Strikingly, the continuation of Hadith 6924 centers around the return of Jesus Christ: “And as they would be busy in distributing the spoils of war (amongst themselves) after hanging their swords by the olive trees, the Satan would cry: The Dajjal has taken your place among your family. They would then come out, but it would be of no avail….

“Certainly, the time of prayer shall come and then Jesus (peace be upon him) son of Mary would descend and would lead them in prayer. When the enemy of Allah would see him, it would (disappear) just as the salt dissolves itself in water and if he (Jesus) were not to confront them at all, even then it would dissolve completely, but Allah would kill them by his hand and he would show them their blood on his lance (the lance of Jesus Christ).”

ISIS militants became even more fixated on the prophecy after they conquered Dabiq in August and the town’s name has become a buzzword for their struggle against the western “crusaders.” The terror group even named its glossy magazine “Dabiq,” in which it embellishes its victories and elaborates its radical views.

Hadith texts are considered more vague than the Quran and open to diverse interpretations, which can lead to errors, some scholars maintain.

ISIS has even used these texts to justify the enslavement of women. When ISIS captured villages in northern Iraq in August and they detained Christian and Yazidi women, they justified their actions by saying the Hadith prophesied the revival of slavery as a sign of the Last Days.

ISIS videotapes their own war atrocities

that Islamic State uses religious texts as their blueprint more than al Qaeda or perhaps any other radical group before it.

Moderate Sunni Muslim scholars in the Middle East say ISIS has misrepresented the teachings of Islam. “Their preoccupation with manifesting prophecies in modern times…is an abuse of religious texts,” Ibrahim Negm, a senior adviser to the Grand Mufti of Egypt, told The Journal. “It’s a very immature way of reading the religion.”

However, according to The Daily Mail, young supporters of ISIS remain convinced of the prophecy’s validity, with one writing on Twitter: ‘Dabiq will happen for certain. The U.S. and its allies will descend on Syria once they see that the air campaign has failed. That is a promise by God and his Messenger.’

Another tweeted: ‘The lions of Islam have raised the banner of the Caliphate in Dabiq. Now they await the arrival of the Crusader army.’

Before Abu Musab al-Zarqawi was killed in Iraq in a U.S. airstrike in 2006 he spoke about an epic battle coming in Dabiq. ‘The spark has been ignited in Iraq, and its flames will grow until they burn the Crusader armies in Dabiq,’ he said.