(WNS)–The producers of the movie about convicted killer and abortionist Kermit Gosnell have hired bestselling and award-winning novelist and screenwriter Andrew Klavan to write its screenplay. 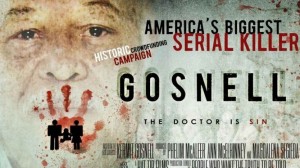 The hire is the latest gutsy move for the team behind Gosnell, which broke records by raising the most money—about $2.1 million with the help of almost 27,000 donors—at Indiegogo, a crowdfunding website.

Husband-and-wife filmmakers Phelim McAleer and Ann McElhinney, along with Magda Segieda, decided to make a film about Gosnell because they believed nobody else in liberal-leaning Hollywood would. They call Gosnell “America’s biggest serial killer”— but he’s also one of the least known. The Gosnell case caused much ire and disgust within pro-life and conservative circles, but barely sparked interest from mainstream media.

During the crowdfunding phase, the filmmakers sent out press releases to several writers, and Klavan was one of them. He shot a response back “within seconds,” calling the project “the best story I’ve ever heard for a movie” and a “stroke of genius.” But over the next few weeks, Klavan started thinking he would actually be a good candidate to write the script—after all, he is a crime and thriller writer, whose novel True Crime was made into a movie starring and directed by Clint Eastwood. He’s also a brassy conservative who doesn’t mince words about Hollywood’s liberal takeover of popular culture, penning several controversial columns and opinion pieces on the subject.

Klavan told me as the Gosnell trial was unfolding, he was most “appalled” by the barren media section at the courtroom: “I thought, ‘How is that possible? What were they thinking?’ I really followed the press’ responsibility at the time. … That seems to be the core of the story: it’s really this almost conspiracy of silence—not just the press, but the state and local officials as well.”

That “wall of silence” is the angle Klavan will be pursuing while writing the script.

“There’s always going to be evil people like Gosnell,” he said. “But they only thrive when regular, decent, normal people work to protect them.”

Given the grisly nature of Gosnell’s crime, Klavan said he is most concerned about keeping the movie compelling without “torturing” the audience on the gruesome baby-killing details. Instead, he plans to highlight the courage of individual investigators and reporters who uncovered the horrors going on in Gosnell’s facility. His previous experience as a local reporter covering crime should lend some interesting perspective as well.

The crowdfunding success for Gosnell clearly indicates public interest—but will it also draw interest from people outside the pro-life community? Can a movie accomplish what the media couldn’t? Klavan said he doesn’t want to “hammer” propaganda over viewers, but let the truth reveal itself through good storytelling: “One of my long-standing subjects is the need to be able to tell the truth … and if you can’t, then you should change your mind.”