Another Beloved Children’s Show Falls Prey To The LGBT Agenda 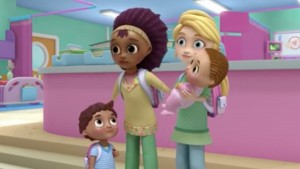 Leftist groups have been pushing the LGBT agenda into every aspect of public entertainment in recent years. Virtually every adult sitcom, mainstream news program and movie now features homosexuality as commonplace, and pushes for its acceptance. But now these subtle messages are becoming more blatant and prevalent — and, sadly, more present in children’s programming.

The Disney Corporation, once a paragon of virtue in promoting traditional roles and American values, has increasingly injected LGBT propaganda into their programming. The most recent case of this, however, is the most frightening of all. Disney Junior, whose programming targets preschoolers age 2 to 5, has introduced homosexuality to our youngest and most vulnerable children.

The episode entitled “The Emergency Plan” aired on the Disney Channel last weekend. It showed two doll moms who are a couple, played by well-known lesbian Wanda Sykes and Portia de Rossi.

The activist group One Million Moms says showcasing a same-sex couple in the animated series, should not come as a surprise, pointing out that the show’s creator and executive producer, Chris Nee, is an out and proud lesbian.

In an online interview with After Ellen, a lesbian oriented website, Nee explained her desire to instill subtle messages about sexual orientation into the storyline.

Show creator Chris Nee says that because she has children with her partner in a lesbian relationship, all young children should be subjected to this reality and forced to accept it.

Disney Corporation has been slowly injecting subversive messages into their children’s programming over the last several years as well. In a 2014 episode of the popular “tween” show “Good Luck Charlie”, a lesbian couple was prominently featured in the storyline.

Disney then aired its first on-screen homosexual kiss on the kids’ show, “Star vs. the Forces of Evil.” Producers of that program also aired a concert scene featuring several same-sex couples kissing during a song entitled “Best Friends”.

And more widely publicized was last year’s blockbuster movie “Beauty and the Beast”, featuring a “gay moment” and gay characters while raking in millions of dollars and much positive attention from the liberal media.

Now it remains for parents to take action to protect our young children from the onslaught of the LGBT agenda in programs falsely labeled as “family friendly.” The left will continue to promote their message of “inclusivity” and continue to attack conservative parents and the traditional values we wish to raise our children with.

Conservative website One Million Moms responded to the airing of the shameful “Doc McStuffins” episode:

Meanwhile, One Million Moms called for a boycott of the show saying, “Conservative families will have no choice but to no longer watch Disney Channel Network in their homes so they can avoid previews, commercials, and reruns. Families will not be able to allow Disney Channel in their homes, if the network veers away from family-friendly entertainment.”

This shameful turn taken by Disney Corporation would come as a shock and disappointment to founder Walt Disney, who built his company on creating family time in a safe environment and reinforcing traditional family values.

Sadly, as LGBT propaganda continues to permeate our kid’s television shows, parents will be forced to avoid airing these programs in our homes. And the ones truly suffering for this homosexual push are our children themselves, who will not understand why they cannot watch their beloved characters in their favorite programs.