Another One Bites the Dust

Who knew that people of no faith were so maligned that over twenty secular groups have been forced to merge together to combat discrimination? Apparently, there is such a rampant prejudice against non-believers that a Baptist leader at a prominent seminary has “felt led” to champion their cause to be “loved and treated with kindness” by lending his name and voice to their organization. Atheists are gloating, boasting, and bragging after an endorsement was given by Danny Akin, president of Southeastern Baptist Theological Seminary, in a two minute video posted online specifically created for the Openly Secular Campaign. Akin has joined with the likes of Bill Maher, U.S. Rep. Barney Frank, and other notable atheists to ostensibly advocate for freedom of religion.

“Our mission is to is to eliminate discrimination and increase acceptance by getting atheists, freethinkers, agnostics, humanists and all nonreligious people to be open about their beliefs,” said Todd Stiefel, Chair for the Openly Secular coalition and founder of the Stiefel Freethought Foundation. “By being open about our beliefs and values, we can show that we, like all people, are worthy of love and kindness undeterred by religious differences.”

“…Stiefel, president of the Stiefel Freethought Foundation, has donated more than $4.7 million dollars to nonprofit organizations in the secular movement. Founded after he stepped down as chief strategy officer of Stiefel Laboratories when the family business was sold for $2.9 billion, his foundation supports organizations including American Atheists, the ACLU, Freedom from Religion Foundation and Americans United for Separation of Church and State.

“What I am trying to accomplish is multifold,” Stiefel told CNN in 2013. “I consider myself working on the next civil equality movement, just like women’s rights, LGBT rights and African-American civil rights. We are still in the early stages of eliminating discrimination against atheists and humanists. That is something I really want to accomplish…” -baptistnews.com

Count Danny Akin in as part of this new equality movement. He reminds me of another hand-holding (figuratively and literally) pastor who is all about finding “common ground” in the name of “diversity and tolerance”.

“You are probably wondering immediately: why would I be doing a video at the site of Openly Secular?” Akin asked in the video. “The reason is that though we do disagree about some very important issues, we also agree about some important things as well.”

“For example, we do believe, together, that no one should be coerced when it comes to their particular religious beliefs,” Akin continued. “Whether they are religious or not religious, they should have the freedom to express what they believe and they should be able to do so without hatred, without discrimination. They should not be put down because they happen to disagree with another person in terms of what they believe. 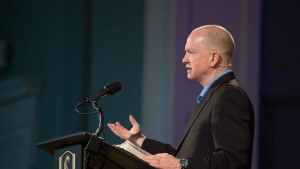 “We also believe that all people are valuable and have dignity and worth, and therefore all people should be respected and should be allowed to express their beliefs openly according to the dictates of their conscience. Of course we also believe we can come together to try to help in areas like poverty, in the area of making sure our planet and environment is well cared for, and there are a number of other things that we can come together and work together with mutual love, mutual respect and understanding for one another.”

Doesn’t that sound so…Christian? How can one argue with tolerance, love, and respect for others?

Let’s break it down:

Yes, his first statement is correct. I am absolutely wondering why anyone who calls themselves a Christian, particularly the president of a Baptist seminary, would even consider making a video for Openly Secular— much less associate with an organization that funds so many groups with anti-religious sentiments. Did Akin forget Ephesians 5:11?  ‘Take no part in the unfruitful works of darkness, but instead expose them.’

What were those important issues that they disagreed upon? Who wants to bet me they were “eternal” issues? Speaking of his new friends, I am also wondering whether it even occurred to Akin that he has and will be forever “unequally yoked” with non-believers?

‘Do not be unequally yoked with unbelievers. For what partnership has righteousness with lawlessness? Or what fellowship has light with darkness? What accord has Christ with Belial? Or what portion does a believer share with an unbeliever? What agreement has the temple of God with idols? …’ – 2 Cor: 14-16

“…The difference between spiritual endeavors and a common, secular “working together” must be understood.” The phrase, “unequally yoked,” in 2 Cor. 14 is “repoCvy’w,” transliterated “heterozygeo.” It is actually a compound of the two words “repoc” (“heteros”), and “Coyc” (“zygos”). It was metaphorically used to represent the unequal combining together of working animals, such as a donkey and an ox, to a plow. Because of their differences, these animals would have difficulty accomplishing the task.

Paul is primarily speaking to the Church in this letter and he is literally commanding its members not to enter into a formal working partnership, or alliance with unbelievers–specifically those that would cause them to compromise their witness…” -psalm12outreach

Isn’t it wonderful, though; that they can agree on poverty, the environment, and fostering “mutual love, mutual respect, and understanding for one another”? Of course! Evidently, working together in unity trumps relying on the gospel for solutions to societal ills. Openly Secular has found an unlikely advocate in Akin and… another one bites the dust.