Applebees franchisee: We have 1,000 fewer servers because of New York’s minimum wage hike

The New York food industry is slowing as the minimum wage rises, and one CEO explains how businesses are responding.

Fox News’ Stuart Varney interviewed Zane Tankel, CEO of Applebees’ franchises in New York, who said that his restaurants had to fire 1,000 servers in the past year because of the higher minimum wage.

Tankel said that remaining server’s responsibilities were more like concierges, who assist customers with tablets and meets any immediate needs. “The model now that we’re heading towards where we had one server for three or four tables, we’re moving towards one server for ten tables, eliminating about two-thirds of our labor ultimately,”

Tankel said. “But it’s because of Cuomo, De Blasio, the liberal agenda.” 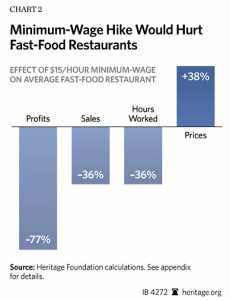 Tankel said that the higher wages were good for the workers who weren’t fired. However, it hurts beginning level workers who may not be able to get a job in the first place. “If you don’t have a job, $100 an hour doesn’t help you a whole lot, does it?” Tankel rhetorically asked.

Applebees is not the only restaurant suffering. The New York Post reported that the city lost 1,000 restaurants last year, and low-income restaurant jobs grew by only 1.4 percent, compared to an average 4.4 percent growth from 2010 to 2015.

“This is a drop-off in restaurant growth that didn’t even show up during the great recession,” EPI Managing Director Michael Saltsman told the Post. “It’s compelling evidence that something big is going on.”

New York is not an isolated case. A Mckinsey report found that 73 percent of food service jobs could be automated using current technology. The American Action Forum estimated that, in 2013, high minimum wages destroyed almost 750,000 jobs and reduced job growth by 83,300 jobs.

Leaders considering minimum wage hikes must analyze past data before acting. If increasing the minimum wage raises unemployment and kills jobs, why do many still fight for $15?