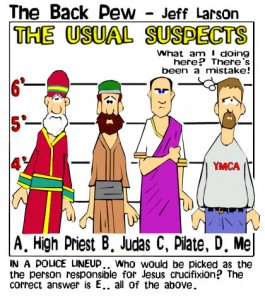 A man had trouble getting his neighbor to keep his chickens fenced in. The neighbor kept saying chickens were noble creatures, and they had the right to go where they wanted. The man had no luck keeping the chickens out of his flower beds.  He tried everything…Two weeks later, a visiting friend noticed the flower beds were doing great! They were blooming and beautiful. So the friend asked, “How did you make your neighbor keep his hens in his own yard?” “One night I hid half a dozen eggs under a bush by my flower bed, and the next day I let my neighbor see me gather them. I wasn’t bothered after that.”

A hunting party, hopelessly lost in the mountains, blamed their guide for leading them astray. “You told us you were the best guide in Colorado!” they cried. “I am,” he said, “but I think we’re in Wyoming now.”

Two paramedics were dispatched to check on a 92-year-old man who had become disoriented. They decided to take him to the hospital for evaluation. En route, with siren going, they questioned the man to determine his level of awareness. Leaning close, one asked, “Sir, do you know what we’re doing right now?” The old man slowly looked up at him, then gazed out the ambulance window. “Oh,” he replied, “I’d say about 50, maybe 55.”

John went to a psychiatrist. “Doc,” he said, “I’ve got trouble. Every time I get into bed, I think there’s somebody under it. I’m going crazy!” “Just put yourself in my hands for one year,” said the shrink. “Come talk to me three times a week, and we should be able to get rid of those fears.” “How much do you charge?” “Eighty dollars per visit,” replied the doctor. “I’ll sleep on it,” said John. Six months later the doctor met John on the street. “Why didn’t you ever come to see about those fears you were having?” asked the psychiatrist. “Well eighty bucks a visit three times a week for a year is an awful lot of money! My friend Joe cured me for $10. I was so happy to have saved all that money I went and bought me a new pickup!”  “Is that so?! And how, may I ask, did Joe cure you?”

“He told me to cut the legs off the bed! Nobody’s under there now!!”

Your church has started a new stewardship drive and has given several reasons for tithing:

Two engineers were standing at the base of a flagpole, looking at its top. A woman walked by and asked what they were doing. “We’re supposed to find the height of this flagpole,” said one, “but we don’t have a ladder.” The woman took a wrench from her purse, loosened a couple of bolts, and laid the pole down on the ground. Then she took a tape measure from her pocketbook, took a measurement, and announced, “Twenty one feet, six inches,” and walked away. One engineer shook his head and laughed, “A lot of good that does us. We ask for the height and she gives us the length.”

A child comes home from his first day at school. His mother asks, “Well, what did you learn today?” The kid replies, “Not enough. They want me to come back tomorrow.”

All I Need To Know About Life I Learned From Trees

It’s important to have roots. ~ In today’s complex world, it pays to branch out. ~ Don’t pine away over old flames.

~ If you really believe in something, don’t be afraid to go out on a limb. ~ Be flexible so you don’t break when a harsh wind blows. ~ Sometimes you have to shed your old bark in order to grow. ~ If you want to maintain accurate records, keep a log. ~ Grow where you’re planted. ~ It’s perfectly okay to be a late bloomer. ~ Avoid people who would like to cut you down. ~ Get all spruced up when you have a hot date. ~ If the party gets boring or dangerous, just leaf. ~ You can’t hide your true colors as you approach the autumn of your life. ~ It’s more important to be honest than poplar.

I swallowed a goldfish. ~ Your lipstick works better than crayons. ~ Does grape juice leave a stain?

~ Look, I painted the front door! ~ The principal called… ~ But DAD says that word all the time. ~ What’s it cost to fix a window? ~ The dog doesn’t like dressing up in your clothes. ~ Has anyone seen my pet snake??? ~ I’m going to run away!!  (Well, maybe SOME day…)

A friend bumped into his pirate buddy on the street, “Hey, I haven’t seen you in a while. What happened? You look terrible.”  “What do you mean?” said the pirate, “I feel fine.”  “What about the wooden leg? You didn’t have that before.”  “Well, we were in a battle and I got hit with a cannonball, but I’m fine now.” “Well, okay, but what about that hook? What happened to your hand?”  “We were in another battle. I boarded a ship and got into a sword fight. My hand was cut off, I got fitted with a hook. I’m fine, really.” “What about that eye patch?”  “Oh, one day we were at sea and a flock of birds flew over, I looked up and one of them pooped in my eye.” “You’re kidding,” said the friend, “You couldn’t lose an eye just from that!” “It was my first day with the hook.”

John was driving down the street in a sweat because he had an important meeting and couldn’t find a parking place.

Looking up toward heaven, he said, “Lord, take pity on me. If you find me a parking place I will go to church every Sunday for the rest of my life and give up beer.” Just then a parking place miraculously appeared! John looked up again and said, “Never mind. I found one!”

Story of my life: I knew better but did it anyway. ~ Television may insult your intelligence, but nothing rubs it in like a computer. ~ Nothing cures insomnia like the realization that it’s time to get up. ~ Sometimes you win and sometimes you learn. ~ I’m great at multi-tasking. I can waste time, be unproductive and procrastinate all at once. ~ I’m not fat, I’m just easier to see. ~ If you think nobody cares whether you’re alive, try missing a couple of monthly payments. ~ If tomatoes are technically a fruit, is ketchup a smoothie? ~ I was visiting a monastery recently and I saw a sign that read, “In case of fire, break vow of silence.” ~ Money is a lousy way of keeping score. ~ Wood burns faster when you have to cut and chop it yourself. ~ You’ve got to kiss a lot of frogs before you find the handsome prince. But he probably isn’t going to be interested in some frog-kisser.

ADVICE FROM AN OLD FARMER

~ Your fences need to be horse-high, pig-tight and bull-strong. ~ Keep skunks and bankers at a distance. ~ Life is simpler when you plow around the stump. ~ A bumble bee is faster than a John Deere tractor. ~ Words that soak into your ears are whispered…not yelled. ~ Meanness don’t jes’ happen overnight. ~ Forgive your enemies; it messes up their heads. ~ Do not corner something that you know is meaner than you. ~ It don’t take a very big person to carry a grudge. ~ You can’t unsay a cruel word. ~ Every path has a few puddles. ~ When you wallow with pigs, expect to get dirty. ~ The best sermons are lived, not preached. ~ Most of the stuff people worry about ain’t never gonna happen anyway. ~ Don’t judge folks by their relatives. ~ Remember that silence is sometimes the best answer. ~ Live a good, righteous life. Then when you get older and think back, you’ll enjoy it a second time. ~ Don’t interfere with somethin’ that ain’t bothering you none. ~ Timing has a lot to do with the outcome of a rain dance. ~ If you find yourself in a hole, the first thing to do is stop diggin. ~ Sometimes you get, and sometimes you get got. ~ The biggest troublemaker you’ll probably ever have to deal with, watches you from the mirror every mornin. ~ Always drink upstream from the herd. ~ Good judgment comes from experience, and a lotta that comes from bad judgment.

~ Lettin’ the cat outta the bag is a whole lot easier than puttin’ it back in. ~ If you get to thinkin’ you’re a person of some influence, try orderin’ somebody else’s dog around.