(WNS)–King Hezekiah abhorred the idol worship rampant in Judah. When he began his reign as the nation’s 12th king, Hezekiah “removed the high places and broke the pillars and cut down the Asherah …,” according to the biblical narrative in 2 Kings 18:4.

Now, the Israel Antiquities Authority reports archaeologists have uncovered a city gate-shrine they believe Hezekiah’s men demolished at the city of Lachish in the eighth century B.C.

“Before our very eyes these new finds become the biblical verses themselves and speak in their voice,” said Ze’ev Elkin, minister of Jerusalem and heritage and environmental protection. 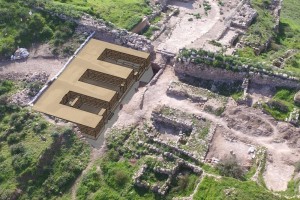 Lachish, a walled city that guarded a main road between Jerusalem and Egypt, was the second most important fortified city in the kingdom of Judah, second only to Jerusalem. It fell to Assyria during King Sennacherib’s siege in 701 B.C. The siege is documented in several sources, including the Bible, Assyrian documents, and in a series of reliefs that once decorated King Sennacherib’s palace at Nineveh.

The gate is located within an 80 by 80 foot area containing six chambers, three on each side of the city’s main street. Archaeologists unearthed the northern section of the gate decades ago, but they only uncovered the entire gate within the past few months.

City gates in ancient Israel were the center of city life, where rulers held courts of justice, prophets often delivered their messages, and criminals sometimes received punishments. Elders, judges, governors, kings, and officials sat on benches at the entrances to their cities.

Archaeologists found benches with armrests, jars, scoops for loading grain, and stamped jar handles in the chambers. Two of the handles have a seal impression indicating they belonged to the king of Hebron. Another impression bears the name, lnhm avadi, probably a senior official during King Hezekiah’s reign. It appears the jars were part of military and administrative preparations to defend the city against Sennacherib’s army.

According to Sa’ar Ganor, dig site director, the archaeologists also unearthed a staircase that ascended to a large room containing numerous ceramic artifacts, such as lamps, bowls and stands, a bench where offerings were placed, and two four-horned altars. The archaeologists were surprised to find the horns on the altars had been intentionally cut off, likely evidence of the reforms King Hezekiah instituted.

In a corner of one room, the archaeologists also found a stone fashioned in the shape of a chair with a hole in its center, likely a toilet built as the ultimate desecration of the place. Researchers have found stones like this before.

There is biblical evidence that, on occasion, when the people demolished a site of idol worship they would build a toilet at the location, a practice described in 2 Kings 10:27: “And they demolished the pillar of Baal, and demolished the house of Baal, and made it a latrine to this day.” But this is the first time an archaeological find has confirmed the custom. Laboratory tests indicate the stone chair was never used as a toilet, suggesting it was put there purely for symbolism.