Are Christian Supporters of Israel “Evanjellyfish?” 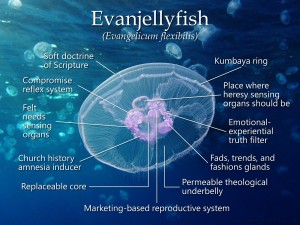 In the June issue of the Good News Today, Dave Daubenmire complains about Christians rejoicing that Donald Trump moved the American embassy to Jerusalem. He goes so far as to say that these Christians are engaging in the “absolute worship of Jerusalem and Israel.” He calls these Christians “Evanjellyfish” – an obvious term of derision.

If I understand Dave correctly, he feels that evangelical rejoicing over what Donald Trump did is “over the top” and misguided. We need to be out there working for the LORD instead of gazing at God’s timeclock waiting for the Second Coming.

I partially agree. We DO need to be working for the LORD, trying to “save others, snatching them out of the fire” (Jude 23). However, I fail to understand how rejoicing over this momentous event conflicts with that.

When God does something wonderful, it is good and right to rejoice and give God thanks. There is a Biblical principle that God will bless those who bless the Jewish people (Gen 12:3). This is true even though the majority of Jewish people do not yet believe in Jesus. God made it clear: He will never cast off the nation of Israel no matter what they have done (Jer. 31:37).