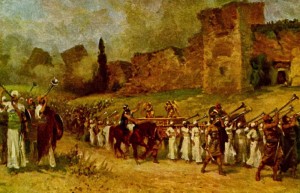 Many religious voices portray national borders as virtually ungodly. All communities should be unquestioningly welcoming to all, not building fences. Nearly all organized Christian political advocacy on border and immigration issues demands or implies open borders are godly while fences and restrictions are inhospitable.

There’s a recent piece in Rewire News‘ religion dispatches by Alana Massey fervently touting this anti-border perspective. She insists: “Neither God nor his messenger traditionally takes kindly to builders of towers (Babel) or giant defensive walls (Jericho)—to say nothing of your garden variety gold enthusiast (see fates of: money-changers in the temple, Judas Iscariot, etc.)”

The God of the Bible sometimes knocks walls down, as at Jericho, or ordains a prophet like Nehemiah to lead their rebuilding at Jerusalem. The lesson of Babel wasn’t about construction but about human arrogance claiming for itself what only belongs to God. The divine judgment at Babel was division of humanity into different tribes and tongues.

Massey seems to advocate some form of what Nimrod sought at Babel, a unified humanity under one cohesive rule, without borders. But the Christian message doesn’t anticipate this eventuality until the end of time, when Christ Himself rules the earth. Until then, nation states, with their borders, have providential purpose. Nations perhaps even continue into redeemed creation, not in conflict, but in harmony under direct divine oversight.

Patiently, with hope and faith, waiting for the parousia doesn’t interest Massey or most utopians who yearn for a fully unified humanity, however implausibly. They don’t realize that such political conformity, in which all nations are effectively erased, can only occur coercively and repressively. Such building of empire is typically portrayed negatively in the Bible, as a wicked parody of God’s Kingdom.

Yet Massey condemns national boundaries as nearly satanic strongholds: “Walls and borders don’t just divide people physically, they destroy parts of us if we do not resist their imagined divine power.”

“Borders are “wounds in the earth and cages that separate the human family, now more literally than ever. But unlike the invisible deities of the religious faiths, borders do not pretend to contain moral or ethical instructions. Borders are the jagged seams of so many emperors’ clothes.”

“National borders are locations of surrender or massacre following state-sanctioned violence: a map with national borders on it is a snapshot of nothing more real than the present coordinates of winners and losers in war.”

“Like gods, belief in borders manifests most vividly in the unsightly monuments we build to them with high-tensile wire and concrete—unsightly temples honoring phantom differences.”

“We need to think of new customs and resist the insistence that imaginary lines that separate people make us safe and special rather than sick and ever more suffocated.”

Massey, like many religious advocates for open borders, wants to overturn the whole human story and return to Eden. But humanity fell from Edenic harmony and now awaits redemption.

Borders are intrinsic to the human story. Sometimes they are ugly and tragic, as formerly between Germany, or currently between Koreas, violently dividing peoples who don’t want division. But other times, borders are fences between friendly neighbors. They don’t imply hostility but signify division of responsibility and protection of diversity. One neighbor behind his fence raises vegetables and flowers. The other neighbor inside his fence has dogs and children at play. Erasing the boundary between these neighbors deprives each of their choices and would impose a repressive commonality inhibiting happiness to both neighbors.

Very few organized religious voices addressing borders and immigration will acknowledge the kind providence that presides over friendly borders whose fences are liberating not repressive. At least by implication they accept Massey’s demonic interpretation of borders.

But borders, properly understood, are gracious gifts to fallen humanity. Borders can be ugly but they can also be lovely. Fences may imprison or fortify. But they also can be friendly markers over which neighbors converse in between tending their own gardens.

Ideally good neighbors share with each other the bounty from each’s garden. When doing so, they anticipate the goodness of restored creation without pretending they themselves can enact that restoration. This generosity is an important corrective to Massey and others who think fences between neighbors are spiritually illegitimate.