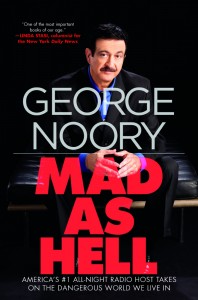 Since taking over for Art Bell as host of the mega-hit “Coast-to-Coast AM” radio program in 2003, George Noory has come to identify with another iconic figure: film character Howard Beale.

Beale, a network TV anchor (portrayed by Peter Finch in 1976’s “Network”) who “lost it” as he watched society unravel, stood up on national television and with a deranged look in his eyes, shouted: “I’m as mad as hell, and I’m not going to take this anymore!”

Lo and behold, it resonated with the masses – much like the Donald Trump phenomenon has done today.

Noory shares some things in common with these larger-than-life men; namely, his discernment about what “the people” really want and think. After decades on the air talking to everyone from truck drivers to UFO researchers, Noory was compelled to have his own “Mad as Hell” moment and thus was born his new blockbuster book of the same name. It’s every bit as entertaining as his daily show.

In a nutshell, Noory explains the world as he sees it currently, then serves as a spokesman for the disaffected masses. Finally, he leaves a message of real hope, encouraging readers and listeners to take a long view and stay steady amidst tectonic changes taking place in society around the world. One of the strengths of the book, and of Noory’s overall philosophy of life, is the fluidity he maintains as he watches events unfold. In other words, apart from bedrock principles, he is able to stay steady in the storms of life, while seeing the Big Picture and, to some degree, the future.

(In “Mad as Hell” he discusses Bible prophecy to a degree. It is remarkable how much he has in common with so many divergent groups.)

Rolling through a vast cultural landscape in “Mad as Hell” Noory discusses the problems he sees as most severe in this country, while also exploring his signature topics, including intelligent life in the universe and the hands that pull the real levers of power in America. It all amounts to a clarion call of sorts for many millions of Americans who have watched not just two disastrous presidential terms of late, but perhaps many dating back decades:

We are going through a metamorphic process, changing, transforming as a planet, a nation, a people, and a society. Some of the changes are shaped by history and natural events in our physical environment, including the incredible transformation of technology over the past several decades. Above all, we live in a dangerous world that is spinning out of control. We are confronted by endless wars, terrorism, global instability, and environmental disasters that are often suspiciously ‘not natural.’

The metamorphosis is not just about things but about people— you and me and our neighbors and families across the street, across the nation, and around the world. As a national radio host with my ear to people who reflect a cross section of our nation, I see folks being stretched mentally, emotionally, the planet being divided into a tiny group of privileged haves and a vast number of have-nots while the middle class is steadily losing what it worked so hard for.

“Mad as Hell” then goes on to help readers refocus their anger and energy toward the actual sources of some of our problems, and offers up some nuance into hot-button issues like climate change.

Noory strongly believes that one of our chief problems, and one that few know much about, is what he calls weather manipulation: “What has happened and continues to happen to our weather and climates is not unlike what has been occurring in recent wars, those bloody terroristic conflicts that appear to be premeditated and manipulated, as if there were a dirty hand in the makings rather than just religious, social, and political animosities going back more than a millennium.”

In other words, he’s bringing subjects into the light and giving them legitimacy, rather than leaving them in the realm of “fringe.” For Noory knows that regular Americans, “real people,” are talking about things and noticing things that to this point have been kept in the shadows.

It’s part of what he (correctly) perceives to be a gathering frustration with our “leadership” that threatens to spill over.