Are You Using Your Gifts for His Kingdom? 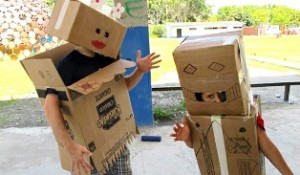 (ANS)  “Each of you should use whatever gift you have received to serve others, as faithful stewards of God’s grace in its various forms” — 1 Peter 4:10

Toilet paper and paper towel tubes tumbled out along with assorted pieces of cardboard, ribbon and other castoffs deemed recyclable by my grandchildren. I was preparing to move. In the process of packing to prepare for the next adventure God has planned for me, I’d opened cabinets set aside to contain the treasures they often used to create masterpieces of their imaginations.

Their treasure trove also included empty oatmeal canisters, rolls of masking tape, crayons and markers as well as a variety of things I might have tossed if I hadn’t seen the possibilities through my grandchildren’s eyes. My dilemma? What should I throw away before I moved and what should I keep?

Just a few days before, my oldest son and his children had come for lunch and a visit. During the course of our conversation, we talked about my move. Later, while going through boxes in my garage, we came across one of my oldest grandson’s creations. He’d spent several days with me last summer. He has a wonderful imagination, and he’d turned cardboard boxes and tubes into an outfit suited perfectly for a warrior, complete with a shield and sword.

Although Brennan is excited about my new adventure with God, he was disappointed when I suggested he take his creation home with him. He knew his parents wouldn’t keep it as long as I had, which was almost a year. I think grandmothers are like that—at least this Nana is. I assured him that when he came to visit in my new home, I would provide all he needed for his imagination to create anew. I added, “You know the best part is in the creation process itself.”

Brennan smiled when I said that because he understood.

As I thought about this recent exchange, I also recalled a conversation I’d had with both him and his sister last month. Cheyenne is multi-talented in music, art and sports while Brennan’s talents lie in the mechanical field. During our chat, he lamented the fact he could not perform in his school’s upcoming talent show because he “couldn’t do anything.”

I reminded him of his gifts, citing a time when, at age six, he’d repaired my dishwasher. Recently, he assembled my new electric can opener as I am challenged in that area. He’s now almost 11-years-old and his dad has taught him to work on automobile engines. Brennan is naturally gifted in that area.

Although he could not perform in the talent show, I reminded him that his gifts are just as important because he could help others. Proverbs 22:29 says, “Do you see a man skilled in his work? He will stand before kings; he will not stand before obscure men.”

In addition, Brennan has a servant’s heart. I’ve seen this since he was old enough to talk. I will continue to encourage him, as well as my other grandchildren, to use their gifts and talents for God’s glory.