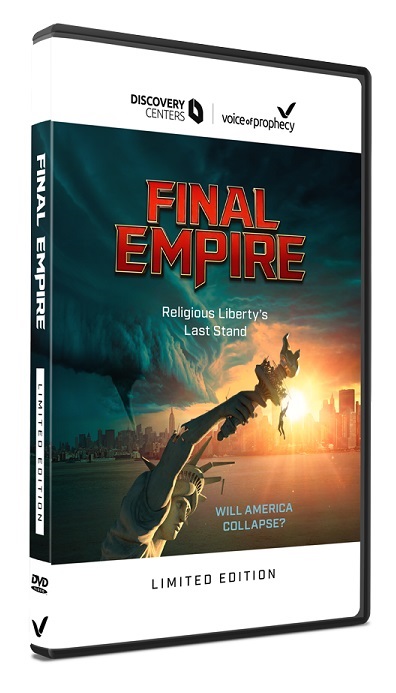 Earlier this year, before Covid-19 Coronavirus restrictions took place, a number of area churches in Rhode Island and Southeastern Massachusetts hosted the mini-series, “FINAL EMPIRE – Religious Liberty’s Last Stand.”  This short, three-night series explored the prophetic past and future of the United States of America, with respect to religious liberty.  There were some very sobering scenarios shared at the meetings.  Things were presented that some attendees frankly felt would never happen in our country.

However, since that time, and in just a very short time at that, events have transpired which have opened the eyes of many of the naysayers; and it has come as an overwhelming surprise to most Christian believers.  During the current Coronavirus pandemic situation, we have witnessed most if not all of our churches in the United States being closed.  The churches may have been closed, but thank goodness Heaven was not.  Amen?

For those who said it could never happen in our country… well, it did!  Our churches were closed!  The Zion Gospel Church in East Providence was, as reported by David De La Cruz on page 4 of the July issue of The Good News Today, entered by police and forced to stop its morning worship service, mid-service.  There were only 25 worshipers there at the time, in a Sanctuary that can easily seat more than 500 people. They were told to leave.

When I first heard about this, it felt quite personal to me; because this was the very church I had given my heart to the Lord in, on the last weekend of March in 1971, during a Revival meeting.  I had come under the strong conviction of the Lord, during the powerful preaching of Rev. Hero, at that Sunday evening service; sensing my guilt before God, and my need of a Savior.  I confessed, repented and yielded myself to God.  Streams of tears of joy flowed from my eyes, and down my cheeks, in gratitude to my loving God who had given His Son on the cross on my behalf.  That night I was fully converted.  It was the beginning of my walk with Him. Praise God!

Getting back to the topic at hand…  People who attended the “Final Empire” series enjoyed attending the series and found the presentations to be very interesting.  To really get an idea of the full impact of the event, we interviewed attendees, who couldn’t wait to tell us about how the series impacted them:

Julie said, “The series was superbly made. It was educational. It reminds us of where the original guiding principles (for the United States), were established.  I only knew it from a very secular perspective, from history books. I like that the Final Empire provided an explanation and education, and I love the added pieces.  It has educated me.”

Dolores found the series to be informative, and said she had no idea, for example, that Christopher Columbus was a Christian, and that he was on a Christian path or mission.  She said that was an eye-opener for her.

Glen relates that, “I just finished three days of attending the Final Empire… and I thought it was so interesting and inspirational,” He was very thankful.

Amanda reported, “I learned new things about America’s founding being influenced by the Bible, and how that is still relevant in modern discussions on religious liberty (today).  I also learned about America’s role (as revealed) in (the book of) Revelation. The speaker showed us where it fit (in) with earth’s ‘opening up’ for the persecuted church. As someone who loves history, it was really exciting to see the parallel.”

As a follow-up to the “Final Empire” mini-series, small group Bible studies were intended to take place in the churches, centering on prophecy.  However, with the closure of all the churches, Bible study guides have been provided by mail, instead.

Plans are underway for a second run of the Final Empire series for this fall, since so many churches expressed an interest in using it to for community outreach.  In addition, a new series is being developed that, like Final Empire, will also use engaging media to reveal Bible prophecy and God’s amazing providence throughout history.  It is the intention of the developers to maintain the highest production quality in these events that point people to Jesus.  A listing of area churches in Rhode Island and Southeastern Massachusetts that will be hosting the Final Empire mini-series this fall will be provided in a future edition of The Good News Today.

The series, Final Empire, and its message about the last-day importance of America’s religious freedom was a hit with area churches that hosted this series.  It emphasized not only the vital need for the separation of church and state, but also the critical importance of embracing God’s complete Biblical truth, in a society where we see “men’s hearts failing them for fear.” (Luke 21:26).  Speaking of fear, see the article elsewhere in this issue titled, “We Will Not Fear the Coronavirus.”