As Goes the Church, So Goeth the Nation

Against incredible odds, Pastor Kent Hovind has won in Federal Court. In my mind, this was the biggest upset since David stoned Goliath. My sources tell me that citizen victory in Federal Court is exceedingly rare. One court observer even stated that it was the first time in 9 years that someone beat the government in the court of Pensacola. I don’t know about you, but I think something is terribly wrong with that. The government always winning is not justice.

Even Forbes Magazine reported about this stunning victory.

I have been intimately and actively involved with the effort to free Kent from prison, and I rejoiced when I got word that the government had dropped all charges against him. Playing a part in helping to set an innocent man free was one of the most important and fulfilling things I have ever done in my life. But being up close and watching the dynamics of this saga unfold, I learned 5 highly valuable lessons that I would like to share: 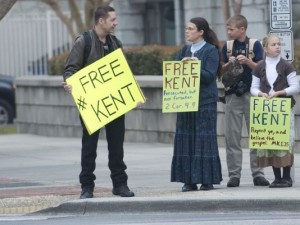 The amazing brief produced by www.lawandfreedom.com with the aid of the www.USJF.net had the same impact on the court that the atom bomb had on Hiroshima. In less than 48 hours after the motion to dismiss had been filed, the entire case was dismissed. After nearly a year of harassment and false accusations against Pastor Hovind the Federal Prosecutor and Judge Margaret Casey Rodgers were forced to admit that what Pastor Hovind had been charged with was not a crime. Yes, you read that right. They were attempting to put him in jail for the rest of his life for something that was not a crime.

Even today I keep hearing from “Christians” who believe that Pastor Kent was guilty and was only getting “what he deserved.” And although it has been proven that he did nothing wrong, many “Christians” still want to see him punished.

Let’s say, for the sake of argument, that Kent was guilty of the “structuring” charges. Let’s also say he was a “tax-cheat.” Pastor Hovind has spent nearly 8.5 years in jail. Is there no grace available for him from his Christian brothers? Aren’t we all, thanks to Jesus, glad that we don’t “get what we deserve?”

But one man said no. He stood his ground. Pastor Hovind almost spent the rest of his life in prison for something that isn’t even a crime. I wonder how often this happens to other defendants in the Federal court system.

People tell me that Jesus didn’t try to fight the government and we shouldn’t either. They show a great misunderstanding of the Scriptures. Jesus did not fight against the Romans because, as He told Pilate, “you have no power over me unless it had been given to you from on High.” But Jesus was a headache for the “religious leaders” of His day. The Pharisees went to Pilate because they said that “they had no power to put a man to death.” All Jews were under the authority of the religious leaders, not the Roman government. Jesus called them unflattering names and raised a rebellion against that evil religious system. He refused to “follow” them and the religious system foisted upon them by the religious thugs. Christianity, as well as America, was birthed out of righteous rebellion. 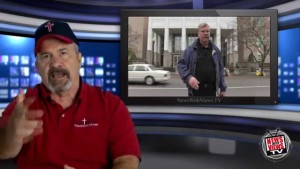 One woman filled with the spirit of the anti-Christ, Madeline Murry, removed the influence of God from the minds of America’s children. How could this happen? Perhaps a better question to ask is how have Christians become so powerless against the forces of darkness? If one devil-filled woman could move the direction of a nation what could millions of people filled with the Holy Spirit of God do against the evil spirits in high places? But we won’t fight. We’ve become convinced that we can’t win. We are convinced that God has given up on America. We won’t admit it, but we really believe the devil has won; that the forces of darkness are stronger than the children of the light. The sad reality is that we’ve lost because we have not fought. Our hope, courage, and faith, has been stolen from us by a defeatist, fatalistic, powerless Gospel spewing forth from America’s lukewarm pulpits.

However, all is not lost. God is not the one who’s dead—only His followers are. It’s time to wake up. Stop following the blind guides.