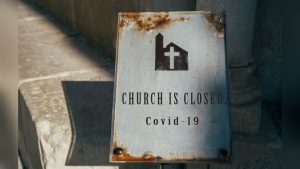 Deuteronomy 8:3 – “God humbled you, …that he might make you know that man does not live by bread alone, but man lives by every word that comes from the mouth of the LORD.”

This is something that Governor Gina Raimondo needs to understand. Recently, she launched outdoor dining to give some relief to restaurant owners. But many, like the owners of the “Eleven Forty-Nine” in Warwick, announced they are closing for good anyway.  Others have also said they may never be able to reopen because of the damage that the economic shutdown did to their business. One restaurateur told me that it’s hard to get his employees to come to work because with the stimulus package, their unemployment check is bigger than their paycheck. So, while the Governor has made some concessions to restaurants, for many it will still be too late.

We can’t allow the same thing to happen to our churches. Churches, while being “houses of worship,” are also non-profit businesses with overhead costs that must be met to remain open and meet the needs of people in our communities. Those needs have increased as a result of COVID-19. As the unemployment rate rises, so does depression, drug addiction, suicide and domestic abuse.

It has already been said that we don’t want the cure to be worse than the disease and that bears repeating. For tens of thousands of Rhode Islanders the church is the “spiritual stimulus” that helps them rise above the stresses and problems of the day. As Jesus said, “Man does not live by bread alone, but man lives by every word that comes from the mouth of the LORD.” Churches are mainly where those words are spoken!

The Government, for all the good it can do, is not God. We are very thankful churches can open on May 30th, but 25% of seating capacity is not enough and we want that figure to be at least 40% and preferably 50%. Not all churches will feel comfortable with that, but we should each be trusted to make that choice. After all, you don’t have to be a historian to know that most hospitals and universities in America were begun by people in the pews of our churches. We can do this and do it well – at least as well as the grocery stores, liquor stores and the strip club that were allowed to open.

Most of our churches have already thought through and planned for reopening. Most have enough square footage to abide by social distancing and yet accommodate 40-50% of seating capacity. Massachusetts has done this even though they were hit harder than Rhode Island by COVID-19.

While we are grateful for our Governor’s leadership and recognize the unusually heavy responsibilities upon her shoulders at this time, we would like to petition her for three things.

If you agree with these, please sign our petition at familypolicyalliance.com/ask-the-governor and it will be sent to Governor Raimondo instantly.

Chairman, Board of Advisors – RI-FPC