At the White House, Worship Leader Kari Jobe “Sat There with Tears” in Her Eyes: “It Was Peaceful. It Was Home” 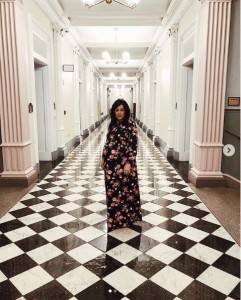 Caption: “They pray and seek God for wisdom for people. It all seemed beyond politics—it was Kingdom. I realized there are some Kingdom minded people who work in the White House and that was extremely encouraging.” -Kari Jobe

(Washington, DC)—[CBN News] Christian music artist Kari Jobe recently joined a group of worship leaders for a special meeting at the White House, and she posted some profound thoughts about the Kingdom of God being seen on earth and the urgent need for prayer for America’s leaders. (Screengrab image: via Instragram-Kari Jobe)

The Christian artists, including Tauren Wells and Danny Gokey, were invited to a “Faith Briefing” which was held to show what the Trump Administration is doing in the area of faith-based projects.

Jobe posted about the visit on Instagram, calling it an honor.

“Cody and I were honored to be invited,” she said. “As I stepped foot into the White House, I had to just take a moment and take it all in. I was thinking through how many great men and women have served and led in that house, have come to visit that house, have changed history inside that house. The thing that moved me the most though was the peace I felt. It wasn’t chaotic, it wasn’t heavy … it was peaceful. It’s a home. I thought that was special.”

She pointed out some of the faith-based initiatives the White House is working on.

“In the faith briefing we heard from a few government leaders about incredible things that are going on behind the scenes that media and news never talk about. Projects to rescue victims of human trafficking, rehabilitate former inmates, take care of foster children, help neighborhoods and communities that are falling apart, help rebuild cities after tragedy … just to name a few.”

Jobe said her focus for attending the meeting was related to the Kingdom of God, not political discourse.

“I sat there with tears in my eyes because these beautiful people get up daily and go to work in a governmental facility and think about people; you and me,” she explained. “They pray and seek God for wisdom for people. It all seemed beyond politics—it was Kingdom. I realized there are some Kingdom minded people who work in the White House and that was extremely encouraging. I don’t engage in political jargon & conversations—but I do engage when the Holy Spirit puts a burden to pray or do whatever He has spoken and obey Him. I was moved and reminded to pray every day for our leaders and government.”

She continued, “We won’t always see everything the same, or even agree with everything people say or do … but we are all alive on the earth for such a time as this and what if God is calling new Esthers to rise up?”

Not one to delve into politics, Jobe said she was encouraged by the meeting.

“I’m inspired to stay leaning into the Holy Spirit for our nation and be brave to do whatever He asks, cause it could change history. Stewardship of a calling is important, and this was one of those important days for me.”

Earlier this year, Jobe shared the heartwarming announcement of her pregnancy with her second child with husband and fellow worship leader Cody Carnes. The couple is expecting the baby in February 2019.

The award-winning singer shared her first pregnancy with her sister, Kris, who was also pregnant. But just before Christmas 2015, Kris had a miscarriage. That experience sent Jobe and her “entire family into this season of extreme disappointment, heartache, and trauma.” “I was just feeling really disappointed,” said Jobe.

The singer went on to record a song for her sister called “The Garden.” She said the song was a prayer for her sister that “faith would rise up in her heart again.” Jobe said her sister’s “daughter that’s in Heaven is named James Ivy,” and in the song she uses the plant, and name as a metaphor for faith.”

“Faith is rising up like ivy. Reaching for the light. Hope is stirring deep inside me.”

“God has just used Ivy to remind us that He’s in control, He’s not forsaken us, we’re not forgotten,” said Jobe.

Meanwhile, Jobe and her husband have recently released a powerful anthem to the Holy Spirit called, “Cover the Earth,” and it is touching thousands of people around the globe.