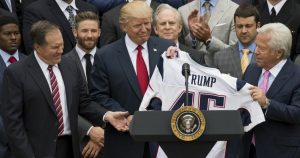 About a month prior, Trump had criticized players who protest by kneeling during the pregame playing of the anthem. “Wouldn’t you love to see one of these NFL owners, when somebody disrespects our flag, to say, ‘Get that son of a b—- off the field right now. Out. He’s fired. He’s fired!” the president said at a rally in Alabama.

Trump’s words disturbed Kraft, as audio footage from the October 2017 meeting — released by TMZ on Friday — reveals. Kraft said players had every right to kneel for the anthem if they so desired. “I must tell you, I think these dialogues are great,” he said. “But the elephant in the room, now, in my opinion, is this kneeling, which every player has a right to do if they feel it’s right.”

Kraft claimed the “problem” was Trump’s rhetoric. “The problem we have is, we have a president that will use that as fodder to do his mission that I don’t feel is in the best interest of the matter,” he said. “It’s divisive and it’s horrible. And it’s actually the opposite of what you all are trying to do.”

Kraft suggested that about 40 percent of people would side with Trump in the controversy no matter what. “I just hope one of the things that can come out of here is that we find a way to be unified, and be able to carry through and follow through,” he said.

Kraft was not exactly shy in his public criticism of Trump either, releasing a statement in September 2017 saying he was “deeply disappointed by the tone of the comments made by the President on Friday. I am proud to be associated with so many players who make such tremendous contributions in positively impacting our communities,” according to USA Today.

Despite Kraft’s harsh critiques of Trump, the Patriots owner is a longtime friend of the president’s. For instance, he has talked about how Trump was there for him when his wife, Myra, died in 2011. “When Myra died, Melania and Donald came up to the funeral in our synagogue, then they came for memorial week to visit with me,” Kraft told the New York Daily News in January 2017. “Then he called me once a week for the whole year, the most depressing year of my life when I was down and out. He called me every week to see how I was doing, invited me to things, tried to lift my spirits. He was one of five or six people that were like that. I remember that.”

The national anthem protests were started in 2016 by then-San Francisco 49ers quarterback Colin Kaepernick, who told reporters, “I am not going to stand up to show pride in a flag for a country that oppresses black people and people of color.”

The NFL’s television ratings plummeted as the divisive protests spread, which Trump pointed out on several occasions. The demonstrations mostly fizzled out after the league and the Players Coalition reached an agreement in May 2018 to “dedicate close to $90 million for efforts and programs combating social inequality,” according to NFL.com.

Kraft made headlines in February when he was charged with soliciting prostitution at the Orchids of Asia Day Spa in Jupiter, Florida.