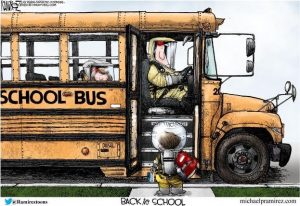 You’ve waded in a creek wearing a necktie. ~ You’ve ever dreamed you were preaching only to waken and discover that you were. ~ You’d rather negotiate with terrorists than the church organist. ~ You see a picnic as no picnic. ~ You’ve ever wanted to fire the church and form a congregation search committee. ~ You’ve been tempted to take up an offering at a family reunion. ~ You’ve ever wanted to give the sound man some feedback of your own. ~ You’ve ever wanted to lay hands on a deacon, and you didn’t mean praying for him. ~ You often feel like you are herding cats instead of shepherding sheep. ~ Your sermons have a happy ending…everyone’s happy when it ends. ~ You’ve never preached on TV, because your wife made you get down before you broke something. ~ You feel that it is your job to comfort the afflicted and afflict the comfortable.

Best out of Office message

I am currently at a job interview and will reply to you if I fail to get the position. ~ You are receiving this automatic notification because I am out of the office. If I was in, chances are you wouldn’t have received anything at all. ~ I will be unable to delete all the unread, worthless emails you send me until I return from vacation on April 4th.  Please be patient and your mail will be deleted in the order it was received. ~ Thank you for your email. Your credit card has been charged $5.99 for the first ten words and $1.99 for each additional word in your message. ~ The e-mail server is unable to verify your server connection and is unable to deliver this message. Please restart your computer and try sending again ~ Thank you for your message, which has been added to a queuing system. You
are currently in 352nd place and can expect to receive a reply in approximately 19 weeks. ~ I’ve run away to join a different circus.

A man was walking through the Sahara Desert, desperate for water, when he saw something, far off in the distance. Hoping to find water, he walked toward the image, only to find a little old woman sitting at a card table with a bunch of neckties laid out on it. The thirsty man asked, “Please, I’m dying of thirst, can I have some water?” The woman replied “I don’t have any water, but why don’t you buy a tie? Here’s one that goes nicely with your outfit.” The man shouted, “I don’t want a tie, you idiot, I need water!” “Okay, don’t buy a tie. But to show you what a nice person I am, I’ll tell you that over that hill there, about four miles, is a nice restaurant. Walk that way, they’ll give you all the water you want.” The man thanked the woman and walked away toward the hill and eventually disappeared. Three hours later he returned crawling back to where the woman was still sitting behind her card table. She said “I told you, about four miles over that hill. Couldn’t you find it?” The man rasped, “I found it all right. They wouldn’t let me in without a tie.”

Customer: “Excuse me, but are you looking to hire any help at present?” Manager: “No, we already have all the staff we need.” Customer: “Then would you mind getting someone to wait on me?”

A 4-year old son was eating an apple in the back seat of the car, when he asked, “Daddy, why is my apple turning brown?” “Because,” his dad explained, “after you ate the skin off, the meat of the apple came into contact with the air, which caused it to oxidize, thus changing the molecular structure and turning it into a different color.” There was a long silence. Then the son asked softly, “Daddy, are you talking to me?”

Mom’s list of things she doesn’t want to hear

Two businessmen walk into a diner in the countryside. They have decided to stop there for lunch, so without ordering anything they sit down, take out sandwiches from their bags and begin to eat them. The waiter sees this and says to them, “You can’t eat your own sandwiches in here!” So the businessmen look at each other, shrug, and swap sandwiches.

A man was very sick. Doctors feared the worst. He is at home one day, resting in his bed. He looks up and says, “Is my wife here?” His wife replies, “Yes, dear, I’m here, next to you.” The man goes, “Are my children here?” “Yes, Daddy, we are all here,” say the children. “Are my other relatives also here?” And they say, “Yes, we are all here…”
The man sits up and says, “Then why in the world is the light on in the kitchen?”

The passenger tapped the Uber driver on the shoulder to ask him something. The driver screamed, lost control of the car, nearly hit a bus, went up on the sidewalk, and stopped inches from a shop window. For a second everything went quiet in the car, then the driver said, “Look mister, don’t ever do that again. You scared the daylights out of  me!” The passenger apologized and said he didn’t realize that a little tap could scare him so much. The driver replied, “You’re right. I’m sorry, it’s not really your fault. Today is my first day as an Uber driver. I’ve been driving a hearse for the last 15 years.”

Old Mr. Smith, the school’s principal, made it a practice to visit the classrooms one day a week. He walked into the 4th grade class, where the children were studying the states, and asked them how many states they could name. They came up with about 40 names. Mr. Smith jokingly told them that in his day students knew the names of all the states. Little Johnny raised his hand and said, “Yes sir, but in those days there were only 13 states.”

If money talks, my wallet is whispering. ~ People with hearing aids can mute you in real life. ~ My Optometrist just told me I had 2020 vision. I told him I wanted a 2nd opinion. ~ I don’t have a dad bod. I have a father figure. ~ If dogs understood peanut butter cups, they would find it cruel that we took one of their favorite people foods and stuffed it in a shell of poison. ~ Thousands of years ago, cats were worshipped as gods. Cats have never forgotten this. ~ I believe we should all pay our tax bill with a smile. I tried — but they wanted cash. ~ I just finished my 8th month trial of 2020. How do I cancel? ~ Alarm clocks are maybe the only device that make you mad in both  scenarios, whether they work or not. ~ I keep adjusting the brightness control on my TV but it’s still as stupid as ever. ~ Heard a rumor about peanut butter…don’t want to spread it. ~ I was so bored I called Jake from State Farm just to talk to someone. He asked me what I was wearing.