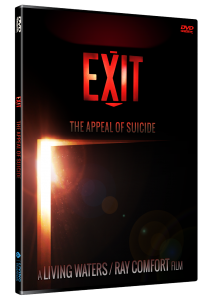 LOS ANGELES – Experts report that suicide in the United States has already reached epidemic proportions, with more than 40,000 taking their lives each year. The rate for teens has tripled since the 1950s, and suicide is now the second leading cause of death among college students.

Filmmaker Ray Comfort, whose movies have been seen by millions, expects that trend to only increase. He identifies two major restraints in American culture that have kept past generations from suicide, which are lacking in society today. “In the 1950s more than 98% of Americans believed in the existence of God, so comparatively few chose suicide because of their religious convictions that it is morally wrong,” Comfort says. “The second restraint was that those who believed in God had purpose for existence and the hope of eternal life.”

Comfort notes that in recent years, more than ten million people have cast off the belief that they are morally accountable to God and that life has any meaning, which he attributes to a rise in atheism and belief in naturalistic evolution.

“Atheism not only offers freedom from moral responsibility, but it means that there is no restraint against suicide. Couple life’s pains with a purposeless and hopeless worldview, and taking your life becomes a viable option.”

A study on suicide by The American Journal of Psychiatry confirms this perspective. It reports, “Religiously unaffiliated subjects had significantly more lifetime suicide attempts…Furthermore, subjects with no religious affiliation perceived fewer reasons for living, particularly fewer moral objections to suicide.”

To combat this epidemic, Comfort has produced a new film called “EXIT: The Appeal of Suicide,” which he hopes will make a difference in the lives of many. “‘EXIT’ is a unique film, because it answers the big questions that the secular experts can’t answer, and at the same time offers hope to the hopeless.” He’s also written a small companion book, How to Battle Depression and Suicidal Thoughts, that presents inspiring truths through a fictional encounter with a suicidal man.

The film’s trailer and further details can be found at www.theEXITmovie.com.