Bad Medical Advice: How Taking an Aspirin a Day for Reported Health Benefits Could Actually Kill You 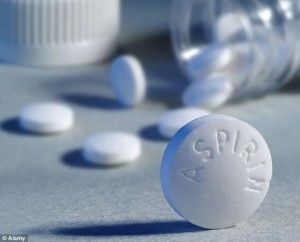 A few decades ago, during the 1970s, “an apple a day keeps the doctor away” morphed to “an aspirin a day keeps heart attacks and strokes away.” This is still a medical mantra today even as science-based evidence has proven otherwise.

Not only does this not work as a preventative measure for cardiac arrest and strokes, the side effects to the gastrointestinal or GI tract can be severe. This is not an opinion. Several studies and even the FDA have expressed concerns about this approach for a healthy heart.

After several years of endorsing the aspirin a day routine as a preventative routine to ensure heart health and prevent strokes, on a May 5th, 2014, FDA consumer update, the FDA stated that after reviewing current studies:

…the FDA has concluded that the data do not support the use of aspirin as a preventive medication by people who have not had a heart attack, stroke or cardiovascular problems, a use that is called ‘primary prevention.’ In such people, the benefit has not been established but risks — such as dangerous bleeding into the brain or stomach — are still present.

The FDA still reserved the opinion that long-term, daily, low-dose (75 mg to 150 mg) aspirin intake could offer protection from secondary heart attacks and strokes for those who had already experienced either unfortunate medical mishap but advised cautious monitoring for side effects there also.

Baby aspirin tablets are 81 mg each. This is what many people use for their daily, low-dose aspirin intake.

Then the FDA denied Bayer Pharmaceutical’s request to label their over the counter (OTC) aspirin product as a prevention against heart attacks or strokes, spoiling Bayer’s bid to increase aspirin sales even more than they were.

Now in May of 2018, a newsletter from the American Heart Association (AHA) has expressed similar low-dose aspirin concerns for heart health and stroke prevention as a prophylactic against primary heart attacks and strokes.

The newsletter does state the evidence for secondary events is sufficient to warrant this protocol with supervision, just as the FDA did in 2014.

There is a disclaimer at the bottom of the newsletter that “not all views expressed in AHA News reflect the official position of the American Heart Association”. (Source)

A Sampling of Studies That Have Influenced This Turn-Around

One of the earliest challenges on the low-dose daily aspirin regimen for heart attack and stroke prevention was published in the BMJ (British Medical Journal) in 2002. Dr. John G. F. Cleland, a professor of cardiology at the UK’s University of Hull wrote a white paper critical of the third meta-analysis from the Antithrombotic Trialists’ Collaboration.

While commending the vast amount of data collected, he mentioned that quality was more important than quantity, and the results were inconclusive based on the following points:

The series of meta-analyses on the antiplatelet activity of aspirin overvalues aspirin’s effectiveness and safety.

All the large long-term trials of aspirin after myocardial infarction show no effect on mortality.

Aspirin may change the way vascular events present rather than prevent them.

This may lead to a “cosmetic” reduction in non-fatal events and an increase in sudden death.

Data on the safety and cost-benefit of aspirin are inadequate. (Source)

After the FDA’s 2004 turn-around on aspirin as a prophylactic for cardiac disease, Dr. Cleland also commented:

The FDA still suggests that aspirin is beneficial for people who’ve already had a heart attack or stroke, but I think the evidence for taking it for more than four weeks after such an event is also weak.

Some of the other studies that helped influence the FDA’s turn-around include:

Pharmacoepidemiological Drug Safety 2009: Swedish researchers studying individuals with diabetes found no clear benefit for aspirin, but did note it can increase the risk of serious bleeding.

Journal of the American Medical Association 2010: A Scottish study found that aspirin did not help prevent heart attacks or strokes in healthy, asymptomatic individuals with a high risk of heart disease.

A Historical Overview of Aspirin and Its Function

As is the custom in the pharmaceutical industry, an active ingredient of a natural healing plant or herb is isolated and chemically reproduced to create a patent. In 1853, chemist Carl Gerhardt isolated and synthesized salicylic acid, the isolate of white willow bark, an herb known for its pain-killing properties by thinning the blood.

By 1889, Bayer trademarked this new chemically-created compound, ASA (acetyl-salicylic acid), and called it “Aspirin.” Cheating mother nature robs all the other plant phytonutrients and compounds that have a synergistic effect that’s usually safe and effective.

Long-term, daily consumption of aspirin can lead to undetected internal bleeding in the GI tract, eventually causing ulcers or leading to other serious inflammatory gastrointestinal conditions, even Crohn’s Disease.

Aspirin acts as a blood thinner, reducing the action of blood platelets from sticking together and coagulating into a sticky mass. This is necessary for external wound bleeding, but dangerous internally.

Many heart attacks and strokes are ischemic, the result of blood clots blocking blood passages in arteries, heart chambers, or in the brain. Ischemic strokes are the most common types of strokes and the least fatal, and often one is able to recover fully from them.

Hemorrhagic strokes that occur because the blood in the brain is too thin are more debilitating and often fatal. This is one of daily low-dose aspirin’s adverse side effects.

A personal experience from this author: One day his mother had an ischemic stroke, but recovered completely and quickly. In fact, she had barely noticed that she was slurring her speech and her mouth was a little cock-eyed the day it had occurred.

Her doctor suggested she start taking a baby aspirin daily. She did for a few years after that. Then she had a massive hemorrhagic stroke and died.

Aspirin, Bufferin, and prescription blood thinners thin blood even when it isn’t necessary. They don’t ease up. There are natural blood thinners that can adjust according to need. And white willow bark is still available for headaches and other pains.

Over the counter pain medications or NSAIDs (non-steroid anti-inflammatory drugs) are more dangerous than most doctors and consumers realize. Tylenol or other acetaminophen generic OTC drugs are even more hazardous than aspirin.

Contains curcumin, which has anti-inflammatory and blood-thinning properties.

It contains a natural acid called salicylate, which is also what is contained in white willow bark. Aspirin uses acetylsalicylic acid, a synthetic derivative of salicylate.

Organic cayenne pepper powder also high in salicylates that act as powerful blood-thinning agents. Paradoxically, it can also act as a coagulating agent for external bleeding. A half-teaspoon or full teaspoon of cayenne powder with at least 40 to optimally 90 Scoville Heat Units (SHU) in water does wonders for heart health.

It contains coumarin, a powerful blood-thinning agent that also lowers blood sugar. Warfarin, the most commonly used blood-thinning drug, is derived from coumarin. A half teaspoon a day in your cereal goes a long way toward both benefits. (Source)