By Jeremy Reynalds
TACOMA, WASHINGTON (ANS) — A summer of intense and bloody persecution has left Iraq’s diminished Christian community “a million times worse” than it was under ousted dictator Saddam Hussein, said a minister known as the vicar of Baghdad during a visit to Tacoma on Sunday.

“I think it could be one of the worst persecutions of Christians in history,” Canon Andrew White told attendees at Tacoma’s Life Center church.

That’s according to a report by Adam Ashton for the News Tribune in Tacoma, WA.

Ashton said the Anglican pastor of St. George’s church in Baghdad has been visiting the Puget Sound area to raise money for the tens of thousands of Iraqi Christians who’ve been driven from their homes by extremist militants in the Islamic State.

Since June, extremist Sunni Muslims have purged Christians from the city of Mosul and other communities in northern Iraq that have had a Christian population for 2,000 years. Militants have ordered Christians to convert to Islam, leave their communities or be killed. 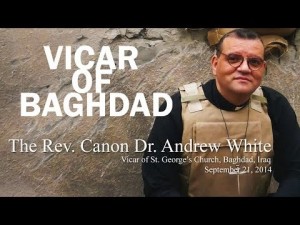 Now, thousands of Christians are living in schools, churches and refugee camps in Iraq’s Kurdish provinces or trying to get out of Iraq for good. Many of them left their homes with almost nothing as they fled the Islamic State.

“What I saw horrified me,” said Life Center Lead Pastor Dean Curry, who visited refugee camps in northern Iraq in August and invited White to the Tacoma church.

The News Tribune reported that the United Nations estimates 1.8 million people have been displaced from their homes by fighting in Iraq this year.

Before the U.S.-led invasion of Iraq in 2003, Iraq was believed to hold about 1.2 million Christians. The minority was caught in sectarian warfare between Shiite and Sunni Muslims, which led hundreds of thousands of Christians to leave the country.

The News Tribune said official numbers are hard to obtain, but human rights groups and Iraqi Christian leaders tend to estimate Iraq’s Christian population to be less than half of its pre-war levels.

White said the ones who left their homes this summer will not return to them because they cannot trust Sunni neighbors whom they believed aided the Islamic State.

In July, Islamic State militants destroyed one of Iraq’s most sacred Christian shrines – the tomb of Jonah in Mosul. It’s believed to be the resting place of the prophet Jonah, who in the Bible was swallowed by a whale or great fish.

“Everything that was central to us as Christians is gone,” the News Tribune reported White said.

The Islamic State has also threatened to destroy Shiite shrines, which led Iraq’s most revered Shiite religious leader to issue a call that mobilized sectarian militias for battle in June.

The extremists in the Islamic State regard Shiite Muslims as infidels because they follow a different branch of Islam.

White first went to Baghdad as a minister in 1998. He stayed through the bloodiest years of the Iraq War. In that time, he said he had been kidnapped and shot at while members of his congregation in central Baghdad endured worse hardships.

< p>Now, conditions are so bad that White’s church has forbidden him from returning to Baghdad.

He blamed the latest plight of Iraqi Christians on the withdrawal of U.S. forces from Iraq in December 2011.

“The reason we had this tragedy now is because you came in and you left us too soon. We weren’t ready to be left,” he said, in encouraging the Life Center congregation to vote for politicians who would not have left Iraq.

U.S. forces left Iraq at that time through an agreement that was negotiated by President George Bush’s administration with then-Iraqi Prime Minister Nouri al-Maliki. Maliki and President Barack Obama did not extend it.

“The terrible thing that the Americans have to realize is that all the intervention, everything they tried to do has been totally wasted. Nothing has been achieved,” the News Tribune reported White said.

He implored the Life Center congregation to donate to charities that help Christians in Iraq. White leads the Foundation for Relief and Reconciliation in the Middle East .

“We need your prayer and we need your money,” the News Tribune reported he said.

One churchgoer asked how he could help bring peace in the Middle East.

He told the church that serving in Baghdad through dark days strengthened his faith.

“It’s really, really terrible, but (God’s) glory is still there,” he said.