This morning, a looming shadow of state government leans menacingly, face lined with trouble, over a father. It rises each morning to taunt the tall patriarch. Its crooked finger focuses, straightens and points authoritatively towards a horrifying ultimatum. With every characteristic of a modern-day Goliath, Connecticut’s healthcare law looms upon the father’s doorstep. This morning, and each morning which glints upon the offered, blood-soaked sword, the giant stands upon the threshold, enormous and nearly celebrating victory. The giant, certain that his David is trapped, nods with proud finality.

Yet, in a plot twist etched within the smooth surface of five small stones, Goliath once again underestimates David. 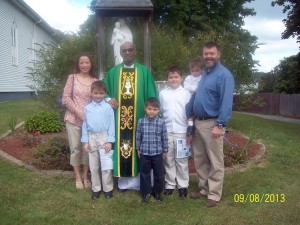 “Government, like dress, is the badge of lost innocence; the palaces of kings are built on the ruins of the bowers of paradise.”  ~Thomas Paine

In the historically rich town of Dayville, Connecticut, Barth Bracy resides with his wife, Abbie, and their four young children. Bracy, the executive director of the Rhode Island Right to Life, stands between his immovable devotion to life, his family, and the giant of the State’s healthcare exchange.

Barth E. Bracy explains, “The government is coming after my family with a carrot and a stick. First they dangle a carrot, offering subsidies to us that would lower our health insurance costs from $494 per month to $2.63 per month, but with a catch — we would need to reach into our pockets and pay a $1 fee each month (though possibly more), from our own private funds, that will be used exclusively to pay for other peoples’ abortions.”

Bracy, cultivating a patriarchal beard once brown and now flecked with grey refuses to violate his conscience in the name of monetary comfort.

“Though it costs $494 per month, we like our current insurance plan (which doesn’t cover abortion) and would rather keep it than to pay abortionists for killing babies. But because we refused to bite the carrot, the government now pulls out the stick, telling us that our current plan, the plan we like and want to keep, is being cancelled by force of law and that the cheapest Obamacare-compliant private plan available to us will now cost $900 or more each month. Thus we will now no longer be able to afford health insurance for our family (not a pleasant scenario for parents with four young children) and, on top of that, we will face government-imposed fines (the individual mandate) for not having insurance coverage.”Barth Bracy Wielding

For passionate, dedicated champions of life like Barth Bracy, such a mandate lays out a personal and spiritual battlefield of unthinkable ramifications.

So the giant’s fingers push the Bracy family between a rock and a hard place. Looking up at the State’s expansive and heavy hand, this father with the spirit of David describes his “hard place” with precise determination.

“It is simply not permissible for any Christian to deliberately participate in the taking of innocent human life,” states Bracy. “To pay the government-mandated abortion fee is a direct violation of God’s law.”

Still, the cold, weighty surface of the rock presses against his back.

“Our private health insurance will become unaffordable for us unless we are willing to violate God’s law and our conscience. We have a responsibility as parents to provide for the health care needs of our children and, we believe, that carrying health insurance is the most prudent manner in which to fulfill this responsibility God has entrusted to us.”

Barth Bracy and his wife Abbie, whose current insurance plan will expire in November, are filing a lawsuit against the Connecticut Healthcare Exchange. They challenge the state healthcare plan which would force them to buy health insurance containing a mandatory surcharge for abortion coverage.

Becky Miller, a pro-life advocate and close friend of Bracy’s declares, “Barth has never been afraid to take on giants in the fight for life.”

“We are a simple family trying to live a fulfilling life by focusing on the essentials: God, family, country,” explains Bracy. “The regime presently governing our country has now put my wife and I in the position of choosing between our duties to our family and our duties to God. This strikes to the very core of everything we are about.”

So David swings his sling. The giant now stands in the path of this father’s smooth stones.

Elie Wiesel, internationally acclaimed historian of Nazi Germany, writes, “Do not hang a man whose only crime is fidelity to his ideal.”

As a David of God, Barth Bracy dauntlessly defends his ideals, willing to face incredible odds in the service of the One who makes the impossible possible.

After all, who else can make a rock and a hard place, crafted by the government’s healthcare, into five smooth stones?