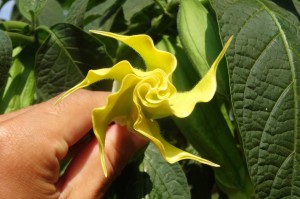 (WNS)–A Swiss botanist recently conducted an intensive study of why so many plants sport flowers or leaves with beautiful spiral patterns that conform to the golden ratio, also known as the divine ratio.

Botanist Cris Kuhlemeier investigated tissue mechanics, the roles of plant hormones and proteins, cellular communication, and adaptive functioning in attempt to understand what generates the spiral patterns that align precisely in the golden ratio. He concluded that the mysterious spiral patterns must relate to “reproductive strategies.” But Discovery Institute experts point out, “Flowers don’t have ‘reproductive strategies,’ because they have no brains.”

Perhaps a better starting point for understanding the purpose of the divine ratio is to acknowledge the divine God who designed it.