‘Because of Gracia’ Wins Big At Life Fest Film Festival

Los Angeles, Ca (ANS) — Because of Gracia, a teen romance with a spiritual twist, scheduled for a September nationwide release was the big winner at the 7th annual Life Fest Film Festival, with wins in two key categories, Best Actress for the film’s star Moriah Peters, and Life Fest’s Spirit of Capra Award for the picture’s helmer, Canadian director, Tom Simes.

According to a news release, Peters’ win was something of a surprise as the first-time actress edged out veteran Dee Wallace, best known for portraying Elliot’s mother in the classic film E.T., to win in the best actress category. 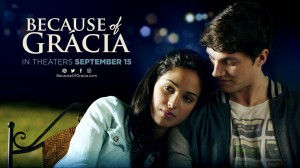 “As a first-time actress, I never would have anticipated sharing a nomination with someone as talented as Dee Wallace,” noted Peters who was performing in concert in the Inland Empire of Southern California, and was unable to attend the ceremony. “It’s an honor to bring recognition to the team that guided me through my first film experience.”

Named after Frank Capra, the director of It’s a Wonderful Life, the namesake of the Capra award lived a rags-to-riches story, having been born in Los Angeles to a poor family, becoming one of the most influential directors in the 1930s, winning three Oscars and three additional nominations. The Oscars were for Best Director of the films It Happened One Night, You Can’t Take It With You, and Mr. Smith Goes To Washington.

“Frank Capra is one of my favorites,” noted Simes, who teaches film to high schoolers in his native Canada. “His movies inspired me and I hope that Because of Gracia will be an inspiration to those who see it as well.”

Life Fest executive producer Brian Johnston noted, “Each year we look for that film and directors that most clearly reflect the ideals and themes we see underscored in Frank Capra’s works. With Because of Gracia, Tom Simes has kept that spirit alive.”

Because of Gracia releases nationwide on September 15th and its website is www.becauseofgracia.com