It started out as casual bike rides between father and son, only 30 minutes to an hour long. However, for Ben King, the casual bike rides with his father have morphed into a three-week-long tour; the Tour de France.

King has been a professional cyclist since the age of 19 and is now sponsored by Garmin-Sharp, a USA pro cycling team. The Tour is one of the biggest and most grueling events to happen in sports and this year was King’s first time riding the Tour.

“It’s a little overwhelming,” says King. “ was excited and terrified. The roads of the first few stages were filled with carnage. Some things are out of our control, like crashes. I tried hard to stay focused but there was a lot going on. Press everywhere. Interviews every day. Crazy fans. It’s a circus. I wanted  to soak it all in.”

King, the first Virginia native to start and finish the Tour de France, left with a number of accolades: He finished within the top 50 riders five times; he was eighth place in competition for the Tour’s white jersey, given at the end of the race to the top-finishing rider 25 years and younger; and he finished 53rd overall in the classification, the first rider for Garmin-Sharp. 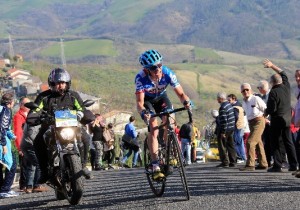 For every feeling of nervousness in the craziness, there is the thought in the back of King’s mind reminding him of his true purpose in cycling; It’s all for God and to bring glory to Him.

“I was raised in a Christian home and grew up with all the answers to big questions about life. I feel like my faith is constantly being renewed and strengthened by my own experiences, even facing my fears and doubts have led to affirmations,” says King.

A professional cyclist can be on the road 10 months at a time. It’s a fiercely competitive sport (much like the more popular sports of basketball and football), and an event such as the Tour de France draws a lot of attention worldwide. However, what keeps King motivated isn’t the attention from the spectators, but rather the improvement he sees in himself each year.

“I’m motivated by the desire to reach my full potential,” says King. “I show improvement each year.

“Also, I love the sport. It’s a lifestyle. I even embrace the suffering. There is something purifying about coming home empty, knowing you’ve given your best effort and are working to improve yourself. I get to see the world and race in amazing places. I get the adrenaline of competition and have made lifelong friends through the sport.”

Having a strong sense of community and Christian fellowship is something that keeps King level and grounded, especially now that he has participated in the Tour. One of the many friends that King has made through being a professional cyclist is Todd Henriksen, the director of Athletes in Action cycling.

“Todd has been a great encouragement. He hosts a weekly Bible study online with a small group of pro riders. It’s great to talk about the important things in life with guys who can relate to each other and pray for each other,” says King.

The Tour de France covers about 2,174 miles throughout France and into neighboring countries in 21 days. Over 188 countries around the world broadcast the event to millions of spectators. Despite the significance given to this race, King finds his own significance in God alone.

“My identity as being loved by God first and as an athlete second has allowed me to deal with the pressure and disappointment that accompanies a sport where you’re only as good as your last race,” says King. “For every good day there are 10 bad days. On the same note, it has allowed me to approach cycling as an act of worship, pouring my whole self into it as in any other vocation.”

One Bible verse in particular speaks to King. Colossians 3:23 [NIV]: “Whatever you do, work at it with all your heart, as working for the Lord, not for human masters.”

“I feel alive on the bike,” King says. “Each day of health and strength is a gift. I think it’s comparable to a musician worshiping. Cycling is a beautiful sport, and I like to think that with the right mind and heart it also pleases God.”

So, with every pedal, every drop of sweat and every breath, King is riding to please God and leaving the results up to Him.