Benny Hinn Renounces Prosperity Theology: ‘The Gospel Is Not for Sale’ 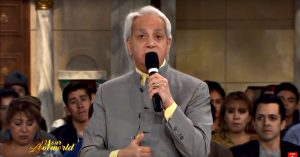 Benny Hinn, who rose to prominence as one of the world’s most well-known preachers of the so-called prosperity gospel, said this week he is “correcting” his views and no longer believes the health-and-wealth theology he formerly espoused.

Hinn said during the Sept. 2 broadcast of Your LoveWorld that the “gospel is not for sale.” “I’m correcting my own theology, and you all need to know it,” he said. “… Because when I read the Bible now, I don’t see the Bible in the same eyes I saw the Bible 20 years ago.”

Prosperity theology promotes the idea that God wants all Christians to be wealthy and healthy. According to this belief, God’s blessings are released when Christians donate money.

Hinn and other prosperity gospel televangelists were the subject of a 2007 U.S. Senate committee probe examining their financial records. As Christian Headlines previously reported, one of those televangelists, Joyce Meyer, said earlier this year she now rejects much of the prosperity theology she formerly taught. Hinn is the second preacher from that group to renounce the movement’s core beliefs.

“I don’t want to hurt my friends whom I love – who believe things I don’t believe anymore,” Hinn said. “And I will tell you now something that is going to shock you. I think it’s an offense to the Lord. It’s an offense to say give $1,000 – I think it’s offense to the Holy Spirit. … I’m done with it. … I think that hurts the gospel. So, I’m making this statement for the first time in my life. And frankly, I don’t care what people think about me anymore.”

Hinn added that when people “invite me to telethons, I think they will not like me anymore.” “If I hear one more time, ‘Break the back of debt with $1,000’ – I’m going to rebuke them,” Hinn said. “I think that’s buying the gospel – that’s buying the blessing. That’s grieving the Holy Spirit. … If you are not giving because you love Jesus, don’t bother giving. Giving has become such a gimmick. It’s making me sick to my stomach.”

A study cited in the 2011 book Health, Wealth & Happiness – which critiqued the movement – found that 50 of the 260 largest churches in America promote the prosperity gospel.