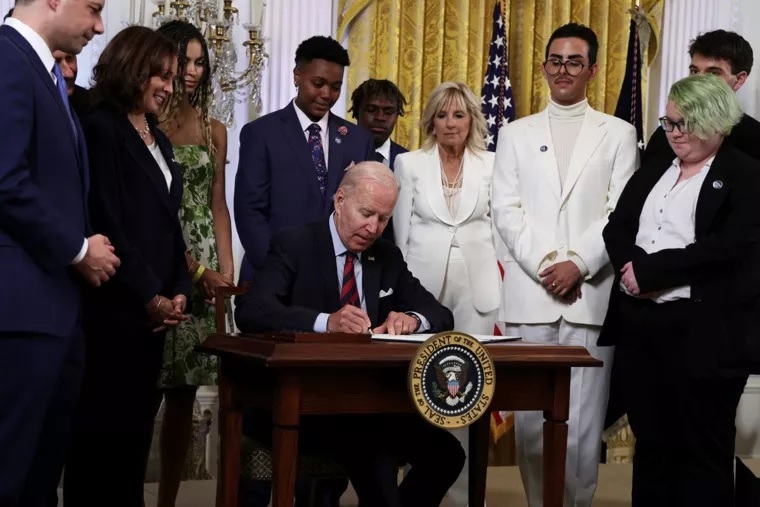 The executive order calls on the administration to “safeguard LGBTQI+ youth from dangerous practices like so-called ‘conversion therapy’ — efforts to suppress or change an individual’s sexual orientation, gender identity, or gender expression.”

The president’s order claims conversion therapy is a “discredited practice that research indicates can cause significant harm, including higher rates of suicide-related thoughts and behaviors by LGBTQI+ youth.”

The order urges Becerra to “consider whether to issue guidance clarifying for HHS programs and services agencies that so-called conversion therapy does not meet federal criteria for use in federally funded health and human services programs.”

Biden also directed the Federal Trade Commission to determine “whether so-called conversion therapy constitutes an unfair or deceptive act or practice, and to issue such consumer warnings or notices as may be appropriate.”

Biden also ordered several executive agencies to work together to “develop an action plan to promote an end to [conversion therapy’s] use around the world.”

Julie Marie Blake, senior counsel with the conservative religious liberty legal group Alliance Defending Freedom, expressed concern in a statement Thursday. She argues that the executive order would “mandate what Christian counselors can say, or not say, in private conversations with their clients” and “demand faith-based foster care and adoption homes” who object to placing children with LGBT couples “violate their religious beliefs or lose needed funding to help children find a forever home.”

While Biden did not mention any “laws and practices” by name, he could have been referring to bans on medicalized gender transitioning for minors in Alabama, Arizona and Arkansas, as well as laws passed in more than a dozen states requiring athletes to compete on sports teams that correspond with their biological sex as opposed to their stated gender identity.

Advocacy organizations on both sides of the LGBT debate quickly reacted to Biden’s executive order.

Terry Schilling, president of the conservative American Principles Project, cited the executive order as evidence that the president “fully supports sex changes for kids” and “plans to impose his view on the rest of the country, by any means possible.”

“One obvious intention of this order is to seek ways to punish states that are protecting children from experimental and dangerous sex-change treatments as well as preserving girls’ athletic and private spaces,” he said in a statement. “Never mind that all these efforts have the overwhelming support of voters; the woke Left cannot abide such democratic lawmaking. Instead, the Biden administration will try to undermine these popular laws however possible.”

Schilling also said it’s “ironic” that the executive order condemned conversion therapy “when, in fact, that is exactly what it is promoting.”

“What the administration really wants to do is lock mentally distressed children into the sex-change process and criminalize any attempts to make them feel comfortable in their own bodies,” Schilling argues.

“This isn’t just bad healthcare; it’s also a morally reprehensible effort to appease radical ideologues and increase Big Pharma profits at the expense of vulnerable kids who cannot adequately consent to the procedures being pushed on them,” he added. “This disgraceful action by President Biden will only serve to further hurt children and tear families apart. Leaders in Congress and the states must continue to vigorously oppose this administration’s dangerous policies in every way they can.”

ADF’s Blake said that “the president is threatening to erase the entire category of women’s sports — egregiously, on the cusp of the 50th anniversary of Title IX, the civil rights law designed to protect fair competition for women.”

In a statement, Victoria Kirby York, deputy director of the NBJC, said the executive action is “a great example of governing for all of us” that “includes several policy proposals that the National Black Justice Coalition has supported and recommended — most recently federal government action on the slate of state attacks on Black, gay, and transgender children in education and healthcare.”